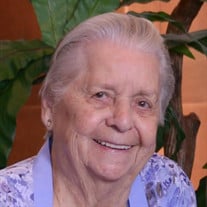 Dorothy Lee Harvey was born on October 12, 1924, in Rogers (Bell County), Texas. She went home to be with the Lord on December 21, 2021. Dorothy served our country in the United States Army during World War II. After her discharge, she took flying lessons. She may be the only student pilot to be congratulated for crashing her aircraft to avoid a collision with a commercial airliner. Although she only married into the Harvey family, she could play 42 as well as any Harvey. She enjoyed making jelly for her loved ones. After grandchildren arrived, she was active in their lives and never missed one of their events, big or small. Dorothy loved the Big Bend Area of Texas, taking many family vacations there including a raft trip through Santa Elena Canyon when she was 83. She enjoyed Mexican food but to her dying day would swear that fish tacos are not tacos and flour tortillas are not tortillas. After being introduced to a drink called a Margarita in Los Mochis, Mexico in 1969, she remained always up for visiting a bar to have a Margarita, even at the age of 96. She was preceded in death by her husband, Caswell “Boots” Harvey and her daughter, Susan Barber. She is survived by her son, David Harvey of Plano; daughter, Laura Schroder and Tod Schroder of Arlington; and son-in-law, Ken Barber of Canyon Lake, Texas. Grandchildren, Patrick Barber, Michael Barber, Jennifer Dennis, Austin Flippin, Alyson Galloway, Christian Harvey, Zachary Harvey, Alex Schroder, and Hillary Cotten; great-grandchildren, Tia Dennis, Tommy Dennis, Daxlee Galloway, Heaton Galloway, Kynsler Galloway, Reese Flippin and Jonah Cotten. Visitation will be held from 6:00 to 8:00 P.M., Monday, December 27, 2021, at Lucas Funeral Home in Hurst. Funeral Service will be held at 2:00 P.M., Tuesday, December 28, 2021, also at Lucas Funeral Home in Hurst with Rev. Marc Lowrance officiating. Committal services will begin at 12 Noon at Sand Branch Baptist Church followed by interment at 1:00 P.M. at Sand Branch Cemetery near Poteet, Texas with Rev. Stanley Harvey officiating. Click here to watch the Recorded Service.

Dorothy Lee Harvey was born on October 12, 1924, in Rogers (Bell County), Texas. She went home to be with the Lord on December 21, 2021. Dorothy served our country in the United States Army during World War II. After her discharge, she took... View Obituary & Service Information

The family of Dorothy Lee Harvey created this Life Tributes page to make it easy to share your memories.

Send flowers to the Harvey family.