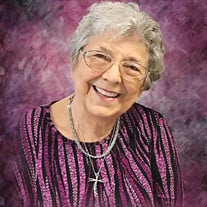 Dorothy Genevieve Georges Winter Despain, 98 of North Richland Hills passed away March 7, 2021. She was born in Manhattan, Kansas on Jan 23, 1923. She was blessed to have had 2 wonderful, loving husbands, the father of her children, Andrew C. Winter who died in Biloxi in 1974 and her second husband O.J. “Jack” Despain with whom she spent 29 happy years. Jack died in 2008 in San Antonio, Tx. She is survived by her 4 children: Andrea (Prentice) Norred, Vicki (Tom) Pekurney, Scott (Sarah) Winter, and Andrew (Tonya) Winter; her 3 step daughters: Linda Despain Dearmond, Sandra Despain Caminiti, Michalene Despain Costello and her grandchildren: Rusty Burson, Lindsey Shaw, Stephen and Ryan Norred, Erin Winter West, Heather Winter Hunnicut, Scott Winter, Vicki Ann, Alyssa, Alexa and Andrew Winter II and her step grandchildren: Laura Sabella, Valerie Clontz, Shiloh Banks, Shane and Shawn Costello, Lisa Kripas, Israel and Joshua Santos, Elena Batchison, Bethany Musgrove, and Ciel Santos. She is also survived by her great grandchildren: Payton, Kyleigh and Summer Burson; Virginia, Lucas, Cicely, Sophia, Eve, John, Caleb, Elizabeth and Abigail Norred. Emily, Su-Hyeon, and Siwan Winter, Madison Hunnicut and 27 great step grandchildren and 20 great great step grandchildren. “Genne” was a wife, mother and teacher. She loved her children, grandchildren and great grandchildren with a passion. She belonged to St John’s Catholic Church in Richland Hills. She was a devoted Air Force wife, following her husband’s military career throughout the US while raising her four children, often by herself, as he served several isolated duties in foreign countries. She spent many happy retirement years at Air Force Village II in San Antonio. Her advocation was Contract Bridge attaining the level of Grand Master several times over. She was a member of the ACBL and made a living as a much sought after bridge teacher and by partnering with others looking for their Tournament Master Points. She traveled all over the country playing Championship bridge in tournaments and winning a number of special events in National Bridge Championships. When she was widowed a second time in 2008, she moved to Fort Worth to be close to her children. She enjoyed her last 12 years at Brookdale NRH Assisted Living where she received compassionate care. She loved babies and dogs and could never pass either without stoping to play with them. She was loved by many and will be missed. In lieu of flowers, the family request donations to Agape, a 501 non profit to help feed and educate the very poor of Vietnam.: Agape 2207 Eva Ln, Euless, Tx 76040. Venmo https://venmo.com/code?user_id=2836631669178368407.Paypal https://www.paypal.me/agapeloveforvietnam

Dorothy Genevieve Georges Winter Despain, 98 of North Richland Hills passed away March 7, 2021. She was born in Manhattan, Kansas on Jan 23, 1923. She was blessed to have had 2 wonderful, loving husbands, the father of her children, Andrew C.... View Obituary & Service Information

Send flowers to the Despain family.