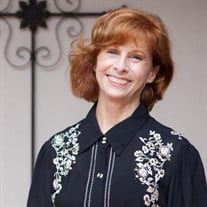 DOROTHY TAYLOR BAUER passed away at her home in Southlake, Texas, with her family by her side on Tuesday, January 25, 2022, after 78 years wherein her LIGHT was a warm glow of Life and Love and Truth shining on all who were close to her. Dorothy Bauer was the beloved wife of Fred Bauer - much loved mother of Scott, Kimberly, and Tiffany - and cherished grandmother of Ava, Jackson, Sydney, Chloe, Samantha, and Colt. Most recently, she adopted her new baby, Rex, an Alaskan Husky, true to her principle of having a “dog-companion” throughout all her 58 years of married life (8 dogs). Dorothy was born in Dallas, Texas in 1943, during the height of World War II, and her baby years were spent with her mother, Ruth Alvis Taylor, following her father, John Taylor, who was in the US Army Air Corps at the time servicing the B-17 “Flying Fortress” at training bases in Louisiana and Florida. GOD & RELIGION: At her core, from her very beginnings, Dorothy embraced and studied the Bible and developed a real and personal relationship with God, from which she derived an exceptionally strong moral base, which guided her way in life and which was the Light that drew others unto her. Her Religion surrounded and permeated her own life entirely and was at the center-of-living in her other “worlds.” BALLET WORLD: Dorothy believed Snoopy: “To dance is to live.” She danced her way throughout her life, all her life, never to quit – knowing that the highest level of Dance is a thing of Mind, not of body. At age 5, she started in the Edith James School of Dance in Dallas, and she made it all the way to New York City by herself, where she was taught by and danced with the “world greats.” If she was not performing, then she taught ballet - one time to over 200 students at her four dance studios in Kaiserslautern, Germany. EDUCATION WORLD: Dorothy knew the importance of education in life and for career, and she was dedicated eternally in its pursuit. Starting in Colorado University In Boulder (and as a Pi Beta Phi), after marriage she was awarded her Bachelor of Science Degree in Education (in 1966) at Kansas University (near Fred’s first Air Force assignment in Topeka). Throughout her life, her degree in English gave her access to Teaching Certificates in several states where Fred was assigned. She taught mainly high school English. Later, in 1991, she was awarded her Master of Arts in English from Wright State University in Dayton, OH, specializing in ESL (English as a Second Language), from which she taught for 7 years in the Community Colleges in Dallas (North Lake and Brookhaven), and in Fort Worth (Northwest). As much as she excelled at learning and doing in education, she loved more “giving back” as a teacher. FAMILY WORLD: Dorothy knew that in a Nation that is a strong defender of Freedom of the Individual, the foundation building blocks of that Nation’s strength are the individual “bricks” that are Family, and she spent much of her life time and effort in the pursuit of her own family responsibilities. Her proof of success is seen in the gratitude and love that her whole family feels for her, as well as their acceptance of the resulting responsibilities they have to maintain her Legacy. Memorial Services will be at the United States Air Force Academy Cemetery at a later time (Spring/ Summer 2022) – as Dorothy directed – where she will wait for Fred at the foothills of the Rampart Range Mountains where we first met. If you are inspired to remember Dorothy in a tangible way; then, at the very top of her Wish-List would be that you make a donation to the DAYSTAR FOUNDATION AND LIBRARY, at 3015 UNITED FOUNDERS BLVD. OKLAHOMA CITY, OK, 73112, with a notation/memo “In Memory of Dorothy Bauer.”

DOROTHY TAYLOR BAUER passed away at her home in Southlake, Texas, with her family by her side on Tuesday, January 25, 2022, after 78 years wherein her LIGHT was a warm glow of Life and Love and Truth shining on all who were close to her. Dorothy... View Obituary & Service Information

The family of Dorothy Taylor Bauer created this Life Tributes page to make it easy to share your memories.

DOROTHY TAYLOR BAUER passed away at her home in Southlake, Texas,...

Send flowers to the Bauer family.