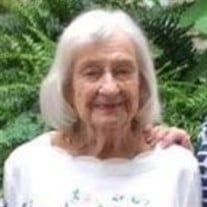 Donna Joyce Swearengen (Grote), 90, also known as Gommy, passed away Monday, March 7, 2022, at her home in Ft. Worth, TX. Her three children and their spouses were by her side. While active and vibrant all her life, in October 2021, Donna was diagnosed with cancer after she suffered and was being treated for a spinal compression fracture. The fourth child of Emma (Hormann) and Theodore “Ted” Grote, Donna was born August 3, 1931, in Aberdeen, SD and grew up in the Mina area. Her siblings included Opal, Arlene & Virgil. After Emma’s death in 1950, Ted married Cora Bruse. With this union Donna was blessed with seven more siblings including Frederic “Bud”, Marvin, Phyllis (Job), Boyd “Chico”, Betty (Hansen), Ann (Murray), and Nancy Karlen. She briefly lived in North Dakota eventually moving to Thornton, CO where she met the love of her life Kenneth (also known as Popsi). Donna and Ken owned and operated many businesses throughout the years including Swearengen T.V. and Electric in the early 60’s, The Waterhole, a cocktail lounge, in the 70’s, and eventually Ken’s Place on The Lake in Mina, a bar and restaurant, in the 80’s. At the time, alcohol for sale was not allowed in Edmunds County, SD. The couple prepared a petition and obtained the signatures of hundreds of Mina Lake and were approved to open the business. Ken’s Place provided a location to enjoy a drink and eat a meal without driving the 15 miles to Aberdeen. Guests could play pool or shuffleboard, join a horseshoe tournament, or take part in the annual Homemade Raft Race! Ken’s Place even sponsored the annual carp fishing tournament which still takes place on the lake today. The Wakeside Bar & Grill stands today on the old County Rd 12 W where Donna and Ken pioneered a delightful place to have fun and enjoy the company of visitors and those around Mina Lake. The beloved couple lived on the lake for 32 years moving to Ft. Worth, TX to enjoy retirement and warmer temperatures in 2012. Donna and Ken resided in a “better than 55” apartment facility where they had a second bedroom and bathroom to entertain the many friends and family from back home and locations around the USA! In late July of 2021, Donna’s children threw her a grand 90th birthday celebration. Over 50 people from across the country attended including grandchildren, great grandchildren, great-great grandchildren, nephews, nieces, cousins, and friends. Donna, who never shied from an opportunity to have fun and party, was as spunky as ever and celebrated for three days! Donna is survived by her three children and their spouses: Carrolyn (Jon) Priest, Debbie (Bob) Schuster and Brian (Bernadette “Bernie”) Swearengen. Grandchildren Kerry (Mark) Matthews, Meghan (Steven) Zimmerman, Rosanna (Andrew) Belschner, Megan (Kevin) McCormick, Amy (Mike Nixon) Swearengen and Kyle Swearengen, Denise Sisneros, Anthony (Sarah) Sisneros and, Santiago (Angela) Sisneros. Great Grandchildren Amanda (Nate) Beals, Caitlin Matthews, Elijah, Ila Rose and Baby Boy Zimmerman, Austin and Avery Belschner, Danielle Calderon, Vincent Ciancio, Andrew Nixon, Constance, Nathanial and Isabella Sisneros, Abram, AJ and Bersia Sisneros and Analise, Tessa, Anessa and Gabrial Sisneros. And Great-Great Grandchildren Lyra and Donovan Beals and Benito Sisneros. Donna was preceded in death by her husband Kenneth Swearengen, her parents and all her siblings except for Nancy Karlen who resides in Aberdeen, SD. A memorial for Donna will be held at Lucas Funeral Home at 1601 S. Main St., Keller, TX 76248 on Monday, March 21, 2022, from 2 – 5 pm. Donna’s ashes will be inurned with Ken at Fort Logan National Cemetery in Denver, CO later this summer. More information will be announced as details are available. Rest in peace mom and dad. You will be missed.

Donna Joyce Swearengen (Grote), 90, also known as Gommy, passed away Monday, March 7, 2022, at her home in Ft. Worth, TX. Her three children and their spouses were by her side. While active and vibrant all her life, in October 2021, Donna... View Obituary & Service Information

The family of Donna Joyce Swearengen created this Life Tributes page to make it easy to share your memories.

Send flowers to the Swearengen family.