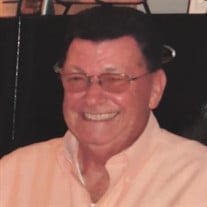 Donald John “DJ” Taake of Grapevine, TX., born September 28th, 1931 in East St. Louis, IL., passed away peacefully with his family by his side, Monday, February 22nd, 2021 at Baylor Scott and White Hospital in Grapevine, TX. DJ was a member of the St. Francis of Assisi Catholic Church in Grapevine, TX. DJ proudly served in the US Navy for 4 years and is a veteran of the Korean War. He was a former member of the Volunteer Fire Department in Fairview Heights, IL. DJ was a master of several trades which led him to go into business for himself. DJ loved his family and life itself. He spent all his time with his loving wife Carol, his son Don,and daughter in law, Karen, and his grandchildren. He loved to smile, repeat jokes and tell stories about his time in the Navy. DJ liked vintage cars, traveling and attending his grandchildren’s sporting events. He was preceded in death by; parents, Herman and Gertrude Semith, Taake, sister, Nona Besse and her husband Raymond Besse, and sister Gail Callahan and her husband Jerry Callahan. DJ is survived by his wife of 62 years, Carol (Chuse), his son Don Taake and wife Karen (Pekar) and grandchildren Dustin Taake and wife Lindsay (McEvoy), Garet Taake and Nicole Taake. He was also a dear brother-in-law, uncle, cousin and friend to many. Visitation: Thursday, March 4th, 2021, 5 to 7 p.m. at Lucas Funeral Home, Grapevine, TX. Graveside service will be held for family only Friday, March 5th at the DFW National Cemetery. Donations can be made to St. Francis of Assisi Catholic Church at 861 Wildwood Ln, Grapevine, TX 76051

The family of Donald John "DJ" Taake created this Life Tributes page to make it easy to share your memories.

Send flowers to the Taake family.