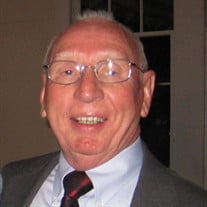 Donald Leslie Sumner passed away on April 22, 2021 in Fort Worth, Texas at age 88 after a long and courageous battle with Parkinson's Disease. He was surrounded by his loved ones in his final days who spent the time playing music and talking about the important and not so important family moments from a life well lived. The youngest and acknowledged baby in a family of seven children, Don was born in Helenwood, Tennessee in 1932 to William Thomas and Mary Elizabeth (Miller) Sumner and was raised in Kentucky in towns up and down the CNO&TP rail line. He served his country in the United States Air Force and was stationed in Okinawa during the Korean conflict. Don graduated from the University of Kentucky as an Electrical Engineer and met and married the love of his life, Viva Sue Combs, in Lexington, Kentucky. As a field engineer they moved about the country; St. Louis, Charleston, Cocoa Beach, New London, and other points east, eventually settling down in Long Island, New York to raise their two children Leslie Meador and Jeffery. Don and Vi retired to Keller, Texas, built a new home, and established themselves as vital members of the United Methodist Church of Keller. At the church, Don co-founded a men’s worship group and was the proud leader of Habitat for Humanity for many years, sharing pictures and drive-by trips to homes he helped create for others. He was a good, family man, known to drop what he was doing and come to the aid of his family and friends, having once jumped on a plane to care for his grandchildren while daughter-in-law Karen rested in bed, expectant with twins. Don had a serious veneer but approached everything in life with a wry sense of humor. He was known to frustrate his family with a Socratic approach to questions that might have called for a direct answer. Always curious and systematic, Don’s favorite hobbies were University of Kentucky Basketball, the New York Yankees, the stock markets, and games of chance including handicapping the horses and card counting at the blackjack table. To the amusement of his grandsons, Don partook in the occasional round of Mario Golf or Wii Bowling. In over 20 summer vacations to Barnegat Light, New Jersey and the Outer Banks of North Carolina, when not reading a book, Don delighted in playing poker around a big table with his son in law Paul Meador and seven grandchildren, Amanda May, Daniel Koss and Andrew, Elizabeth, Caroline, Anna, and Emily Sumner. Don’s family would like to extend a special thank you to the wonderful staff at The Stayton at Museum Way, Fort Worth, Texas who have provided excellent and loving care for Don since the Fall of 2018. Visitation will begin at 2 pm, Tuesday, April 27, 2021 at Lucas Funeral Chapel, 1601 South Main Street, Keller, Texas 76248. Funeral Service will begin at 3 pm, Tuesday, April 27, 2021 at Lucas Funeral Chapel. To view the LIVESTREAM Graveside Service will be held at 10:30 am, Wednesday, April 28, 2021 at DFW National Cemetery, 2000 Mountain Creek Parkway, Dallas, Texas 75211.

Donald Leslie Sumner passed away on April 22, 2021 in Fort Worth, Texas at age 88 after a long and courageous battle with Parkinson's Disease. He was surrounded by his loved ones in his final days who spent the time playing music and talking... View Obituary & Service Information

To view the LIVESTREAM

Send flowers to the Sumner family.