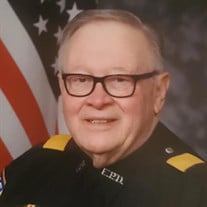 Donald Eugene Scott, Hurst, Texas went to be with his Lord and Savior on January 24, 2021. He will be remembered for his love for his family and service to others. Don was born on August 4, 1942 in Hollywood, California to Deryl and Betty Scott. Don's family moved to Liberty Missouri where he and his brother, Samuel grew up and graduated from Liberty High School 1960. In 1964 he enlisted into the United States Air Force. After completing the US Air Force LPN Nursing School, Don was accepted and served as a member of the elite Air Force Special Warfare, Pararescue Medic (PJ). He served in Vietnam in both 1967 and 1968. Don was honorably discharged with the rank of Staff Sergeant in 1971. A few of his accommodations include earning the Air Medal with Cluster for air rescue and air vac missions. Don later attended Maplewood Community College in Kansas City Missouri, where he obtained his Associates degree in Applied Science. Don started his law enforcement career in May of 1971 in Kansas City, Missouri where he began as a Communications Officer, then quickly becoming a patrol officer, traffic motor officer, and then making the rank of Sergeant. Don specialized in Accident Investigation and while working as a motor officer, he attended the National Traffic Management Institute at Central Missouri State University, receiving high academic marks of excellence in traffic safety. Don had aspirations as being a detective and it was not happening as quickly as Don had hoped in Missouri, so in February of 1980, he was hired by the Euless Police Department as a patrol officer. By 1982, Don had made Detective where he would stay until August 1988, when he became a field training officer. Then in January 1991, Don was reassigned back to the Criminal Investigations division for his second tour-of-duty where he stayed until retiring in 2005. Don loved his community and the Euless Police Department so much that even after his official retirement, he returned to Euless PD and gave another decade of service as a court bailiff and preformed other administrative duties until 2017. Don received several awards and commendations over his career, including being named Euless Police Officer of the Year for 1993. He was also received the Life Saving Award two times, once in Missouri and again in Euless. Don further obtained specialized training in Hostage Negotiations, Interrogation Techniques, Behavioral Analysis, Child Exploitation Investigations, Criminal Personality Profiling, and Homicide Investigations. Outside of work, Don enjoyed fishing, motorcycling, and watching sports. He was a proud 32nd degree Scottish Rite Freemason, who also donated to causes such as Shriners, Special Olympics and the Veterans Association. Don was a member of the Church of Christ and loved serving others. Most importantly, Don was a loving husband, caring father and had a witty sense of humor when needed. He enjoyed spending time with his beloved cats, #1 and Oliver, and his precious dog, Bailey. Don cherished his long term friendships but also had a smile for anyone new he was meeting. In lieu of flowers, the family requests memorial contributions be made in Don's honor to the: Euless Police Department Benevolent Fund, 1102 W. Euless Blvd., Euless, Texas 76039 Preceded in death by parents Deryl and Betty Scott; brother, Sam Scott and his son, Mark Scott. Survived by his wife Denise Scott; 4 children; 7 grandchildren and extended family and dear friends. A Graveside Service with military honors will be held at the DFW National Cemetery. Those details will be shared here once final arrangements have been made.

Donald Eugene Scott, Hurst, Texas went to be with his Lord and Savior on January 24, 2021. He will be remembered for his love for his family and service to others. Don was born on August 4, 1942 in Hollywood, California to Deryl and Betty... View Obituary & Service Information

The family of Donald Eugene Scott created this Life Tributes page to make it easy to share your memories.

Donald Eugene Scott, Hurst, Texas went to be with his Lord and...