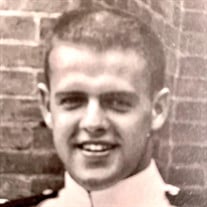 Donald Jack McGinley, Jr., aged 89, completed his final flight on December 11, 2020. He was born in Fostoria, Ohio to Donald J. McGinley and Evelyn Leahy, May 26, 1931. He graduated from Elyria High School, in Elyria Ohio where he played on the championship football team with future Heisman Trophy winner, Vic Janowicz, for which he was very proud. He then attended Miami of Ohio University on a ROTC scholarship where he was a member of the alpha chapter of Beta Theta Pi and obtained a degree in Aeronautical Engineering. There he met his wife of 64 years Carolyn Esther Crawford (Carrie). Always an enthusiastic aviator he became a Navy flier during the Korean War. During the final stages of that conflict he flew F2H “Banshee” fighters off the aircraft carrier Yorktown. He mustered out of the Navy in 1957 achieving the rank of lieutenant. He then spent several years at Chance-Vought (now LTV) before becoming an American Airlines pilot based in Washington DC. Desiring to still fly fighter planes he joined the Virginia Air National Guard fighter squadron. There he flew F84F “Thunderstreaks” with the 192nd Tactical Fighter Group. His unit was called to Europe during the Berlin Crisis where he was an Air Force fighter pilot and obtained the rank of Major. During a hiatus from American Airlines he became a NASA test pilot in Langley Virginia. He piloted aircraft ranging from single-engine jets to simulated space vehicles and space devices used by astronauts. He operated experimental, ultra-sophisticated vehicles including the “lunar bug” and tested the lunar excursion model, now know as the Moon Rover and the Eagle lunar module. American Airlines recalled him and transferred him to Dallas. Not willing to give up his high performance aircraft he transferred to the Arkansas National Guard and joined the 154th Tactical Reconnaissance Squadron where he flew the RF101 “Voodoo”. There he was activated to Japan during the Pueblo Incident. In the 1970’s he purchased the Vought F4U “gull wing” Corsair. With this WWll aircraft he participated in the then Confederate Air Force, and now the Commemorative Air Force. He delighted in flying in air show Pylon races, doing acrobatic maneuvers as well as displaying his restored Navy WWll Corsair. He was given the honorary rank of Colonel. He retired as a captain from American Airlines in 1993 having flown the Boeing 727 and DC10. He was preceded in death by wife, Carrie; father, Donald Sr.; mother, Evelyn and sister, Joan. Surviving are daughter Jo McGinley Gupton (Chris Brooks), son Michael Scott McGinley. Grandchildren Ted Gupton, Jr., Crawford Gupton (Mary Clay), Jamie May (Aaron), Steven McGinley. Great grandchildren Field Gupton, Cecca Gupton. A very heartfelt thanks to his devoted caregivers Erin, Rhonda, Scholastica, Frecia, Joyce, and Danielle. A memorial may be given to a charity of your choice. Burial will be private.

Donald Jack McGinley, Jr., aged 89, completed his final flight on December 11, 2020. He was born in Fostoria, Ohio to Donald J. McGinley and Evelyn Leahy, May 26, 1931. He graduated from Elyria High School, in Elyria Ohio where he played on... View Obituary & Service Information

The family of Donald Jack McGinley Jr. created this Life Tributes page to make it easy to share your memories.

Send flowers to the McGinley family.