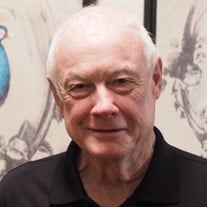 Donald Lee Blevins (81) passed on March 2nd, 2022, at his home in Keller Texas. Memorial Service will be held at 2:00 pm, Monday, March 14, 2022 at Lucas Funeral Home, 1601 South Main Street, Keller, Texas 76248. The family requests those attending to wear either KHS blue and gold or University of Texas burnt orange in acknowledgement of Don’s lifelong passion and dedication for these schools. In lieu of flowers, please consider donating to the Carcinoid Cancer Foundation at carcinoid.org. Don graduated from Keller High School and earned a degree in Civil Engineering from the University of Texas at Austin. Don married his high school sweetheart Kaye and raised 3 daughters. Throughout his career, Don was devoted to helping the City of Keller flourish—from working as a volunteer fireman when the city was still a small town, to designing Keller’s rural water system, and to working for 30 years for the National Weather Service where he helped update and maintain the monitoring systems needed to predict severe storms in the area. After retiring from public service, Don started his own company to keep building for Keller and the surrounding community, Blevins Engineering and Construction. While at Keller High School, Don quarterbacked the football team to the 1957 regional championship. Don remained a proud and tireless supporter of Keller High, and particularly its football team ever since. Don helped design the original game-clock for the high school football stadium which he ran at every game for over 50 years. He became the president of the first KHS athletic booster club where he acquired a cannon for football games and devised the water tower blue light celebration of Keller High School football wins. He would even dash out early from away games if victory were apparent so he could get the water tower lights on to celebrate before the team bus arrived back in Keller. He was active in the Keller Lion’s club since 1965, where he served terms as president and grand marshal of the 67th annual fair and parade. He served on the KISD school board and he was inducted into the Keller football hall of fame in 2008. Don was preceded in death by his father and mother Weldon and Opal Blevins, sister Dianne Forsythe, and grandson Braxton Dingler. Don is survived by his wife of 58 years, Kaye, and daughters Kim Blevins (Tony DeVito), Karen Yoong, and Kristen James (Steve), as well as grandchildren, Madeline Lorenzi (Steven), Kaitlin Yoong (Adam Bonner), David James, and April James, 4 great grandchildren, numerous nieces and nephews, and devoted friends which he considered family. In celebration of Don’s life, the Keller water tower blue lights are shining bright.

Send flowers to the Blevins family.