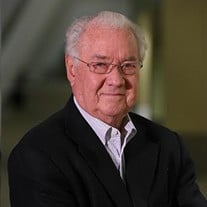 Don Sealy Vaughn, 86 years old, of Flower Mound, Texas, passed away on January 20th, 2022, after a long illness. Don was born September 15, 1935 in Santa Anna, Texas to Marian Russel and Irene Barton Vaughn. Don was the eighth and youngest child. He and his mother moved to Odessa, Texas when Don was 14 years old, after his father’s passing. They lived with Lester, his older brother. Don married his high school sweetheart, Barbara Duncan, after his freshman year at the University of Corpus Christi. They were married June 24th, 1955, and were happily married for 66 years. Don graduated college in 1958 and went into the Air Force Reserves. He served 6 months active training then 6 years in the reserves. His first job after his military service was with a linen supply company for 2 years while volunteering with Kiwanis Youth Groups. He was hired to work at the Kiwanis International Office in Chicago, Illinois, where he became convention manager. Don had a well-rounded career having been in executive roles with the National Association of Home Builders, the Astrodome Astrohall Stadium Corporation, Freeman, the Houston Convention and Visitors Bureau, Billcom Exhibitions, Vaughn, Ducate and Associates, The Augusta Group, CMAC. Don, was an industry legend, an icon of integrity, a servant leader and an all-around good person. His work in the exhibitions industry leaves a legacy that touches us all. He was a humble man and lived to serve the industry he loved. After Don retired in 2010, he spent his time with his horses, going on trail rides, gardening, reading, and spending time with his family. Don is survived by his wife, Barbara Vaughn of Flower Mound, Texas, his daughter, Connie Waldorf and her husband, Mark Waldorf, of Flower Mound, Texas, and their children Kyle and Randa Raley, and step-grandchildren, Collin and Megan Waldorf. His niece/daughter, Dee Masters and her husband, Todd Masters, and their children, Drew and Tessa Masters, of Maryland. His niece, Kim McLain of Stephenville, her daughters, Heather (Wade) Pack and Audrey (Ronnie) Locklear, their children Taylor, Timber and Jake Pack and Grey Locklear. Nephew Scott (Amy) Vaughn and their children Megan and Parker of Arizona. Many other nieces and nephews and loved ones. In lieu of flowers, the family requests donations to the Don Vaughn Memorial Fund, CEIR Foundation, 12700 Park Central Drive, Ste 308, Dallas, Texas, 75251 or via the CEIR Foundation website. Donations in Don’s memory may also be made to the First Presbyterian Church Grapevine, 1002 North Park Blvd., Grapevine, Texas, 76051.

The family of Don Sealy Vaughn created this Life Tributes page to make it easy to share your memories.

Send flowers to the Vaughn family.