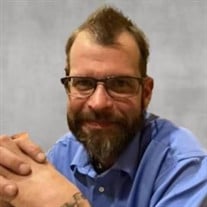 David Joseph Spangler of North Richland Hills, TX passed suddenly in his home on Friday, February 18th, 2022. He was 38 years old. He is survived by his mother, Judi Spangler and father, Eugene Spangler and wife, Runette; his sister Amber Spangler and her partner Elizabeth; his two children, Ayden (15) and Ava (6) Spangler, and their mother Ashlie Spangler; his fiancé, Kim Evans and her children Kirsten (16), Auburn (13) and Addison (8) as well as countless other family members and friends. David was born on April 26th, 1983 in Houston, Texas. Over the years the family spent time in North Carolina, Okinawa, Japan, Maryland, and California. In 1994 the family settled in North Richland Hills, TX. David graduated from Richland High School in 2001 and met Ashlie a year later. Four years later they married and had their first child, Ayden, in December of 2006. Eight years later they had their 2nd child, Ava in June of 2015. Ashlie and David were later divorced. Over the last year and half David and his fiance, Kim, had begun building a life together with his two children and her three children. David took great pride in being a father and cherished his time with all of the children. David worked as a Journeyman electrician in the International Brotherhood of Electrical Workers Union where he had dedicated 16 years of service. He was great at his job, even if he did call himself a lowly electrician. At an early age David fell in love with music. He picked up the saxophone with middle school band and continued playing through high school which included Jazz and Marching band. David loved everything about marching band and percussion. When his son, Ayden, started marching band this last year, it ignited a forever bond. David would sit in the parking lot on the very top of his truck and watch the whole band rehearse. While he enjoyed an array of music, his favorite bands were Metallica and Tool. David was an amazing cook and could smoke just about anything on the smoker. He especially loved to snack on pistachios. Anytime he would sit down on the couch with a bag of pistachios, Ava was right there in her daddy's lap. He would laugh so hard anytime he watched Monty Python and made sure to introduce Ayden to it when he was younger. David was loved by many people and had an array of nicknames over the years. As a child, he was known at home as Bubba. His high school friends knew him as Spanky and Ayden’s band family dubbed him the “Skinny Legend”. Most recently, his Texas Billiard’s family coined him with the name “Pickle”. David was a loving father, a protective big brother, a beloved son, and a cherished friend to anyone who came across his path. He will be greatly missed.

Send flowers to the Spangler family.