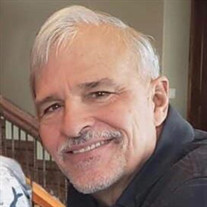 David Fred Baker of Fort Worth, Texas passed away peacefully at home on March 24, 2021 at the age of 69 after a 15 month battle with Glioblastoma. He was born May 16, 1951 in Rochelle, Illinois to the late Frederick “Buck” and Florence (Davey) Baker, a photo engraver and a homemaker respectively. After high school, he attended Northern Illinois University and Kishwaukee College. Dave was employed by Caron International in Rochelle as the dye house manager for many years before being hired for the manager trainee program in 1986 with Carnation, which was later bought by Nestle. For 29 years, he worked in Logistics, holding the position of Operations Manager in Hamilton, New Jersey, then General Manager in Fort Wayne, Indiana and Fort Worth, Texas. Dave married Jennifer (Gruben) on June 20, 1981 in Rochelle, Illinois. Through nearly 40 years, 6 homes, and 4 states, they built their life together, aware of how richly God had blessed them. Dave and Jennifer lived in Rochelle before relocating to Yardley, Pennsylvania, Fort Wayne, Indiana, and Fort Worth, Texas, where they spent the last 23 years. More than anything else, Dave excelled at being “Dad” and “Pops”. He loved his children and grandchildren deeply. He was a protector of all those he loved and he generously and sacrificially showed that love in quiet ways. His love of sports never faded throughout his life. He starred on the basketball and tennis teams in school and continued playing softball, basketball, and golf for many years. He made many life-long friends especially from his years of playing slow pitch softball. Dave, Jennifer and their girls attended innumerable sporting events, at the high school, college or professional level, watching football, baseball, basketball, and golf. Dave enjoyed nature, hunting, and being outdoors. He loved spending time on his hunting land near Bowie, Texas, even when he didn’t bring home “the big one”. He found peace in just watching the wildlife and being in solitude. He never grew tired of learning new things related to both nature and history. He was especially interested in the history of the Civil War, WWII and the Vietnam era. On many family vacations, he would be the one reading every sign at each stop, which included many battlefields and national parks. His longtime dream of owning a Harley Davidson was realized in 2014. For the next 5 years, while upgrading to bigger and nicer bikes suited for longer trips, he traveled on numerous rides with friends, living his dream. Dogs held a special place in his heart and they all seemed to love him back. After retiring, Dave volunteered at Baylor Hospital in Grapevine as a hospital escort for the therapy dogs, as well as in the emergency department. This led to another volunteer job- dog sitting for therapy dogs when their trainers needed to go out of town. Dave was a member of Crown of Life Lutheran Church since 1999, where he served many years as an usher, played in the handbell choir, and served on various community outreach missions. Dave is survived by his wife, Jennifer; children, Amy (Kyle) Eklund of LeClaire, Iowa, Lisa (Justin) Peipert of Keller, Texas, and Krista (Michael) Dellavalle of Lewisville, Texas; his grandchildren, Nora Peipert, Janie Peipert, Chase Eklund, Milo Dellavalle, and Blair Dellavalle; sisters, Barb Manning of Rochelle, Illinois, Brenda (Dave) Jones of Rochelle, Illinois, and Mary (Jeff) Butler of Monticello, Illinois; 13 nieces and nephews and numerous great nieces and nephews. He is preceded in death by his parents and his granddaughter, Spencer Eklund. Visitation will be held on Sunday, March 28, 2021 from 4 PM to 6 PM at Lucas Funeral Home at 1601 South Main Street, Keller, Texas 76248. A funeral service will be held on Monday, March 29, 2021 at 10 AM at Crown of Life Lutheran Church, 6605 Pleasant Run Road, Colleyville, Texas 76034. A graveside ceremony will follow at Bourland Cemetery in Keller, Texas. Memorial gifts can be made to Canine Companions for Independence in Irving, Texas. Click here to view LIVESTREAM

David Fred Baker of Fort Worth, Texas passed away peacefully...

Send flowers to the Baker family.