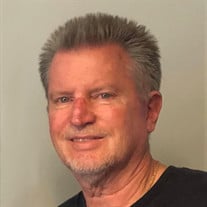 Danny Keith Quine, 71, was welcomed into heaven on March 10, 2021 at his home in Colleyville, Texas. His wife of 18 years, Patricia, was lovingly by his side. He was born on February 27, 1950 in Cordell, Oklahoma to Chester and Ruth Quine completing their family along with his older brother, Don. Dan was a talented athlete excelling in football, basketball and track during his school years. He graduated from Cordell High School in 1968 and enjoyed his 50th class reunion, reconnecting with his classmates, just a few short years ago. He graduated with his bachelor's degree from Southwestern Oklahoma State University in 1974. Moving to Texas in the eighties, Dan worked for the United States Treasury Department for 32 years as a national bank examiner, retiring for three days before joining the Federal Home Loan Bank of Dallas as an analyst for the last 12 years. He made lifelong friends with many of his coworkers. Dan is survived by the love of his life, Trish. He leaves behind their combined family, Russell Briggs and Shari Wilcox of Austin, Lindley Brown and husband Tyler of Keller, Ryan Briggs of Stanton, Courtney Long and husband Andy of Plannegg, Germany and Rebecca Briggs and fiancé Christopher Colamarino of Plano, his brother Don Quine and wife Jane of Puyallupp, Washington. He was Granddad, GranDan and Opa to seven grandchildren. Many extended family members will also miss him dearly. He was preceded in death by his parents, Chester and Ruth Quine and a nephew, Matthew Quine. Dan and Trish, active members of First Baptist Church Colleyville, have worshiped and been blessed with precious friends whose love and support has been unfailing. He will be deeply missed by all those who knew him, and remembered for his generosity, friendship and contagious sense of humor.

Danny Keith Quine, 71, was welcomed into heaven on March 10, 2021 at his home in Colleyville, Texas. His wife of 18 years, Patricia, was lovingly by his side. He was born on February 27, 1950 in Cordell, Oklahoma to Chester and Ruth Quine completing... View Obituary & Service Information

The family of Danny Keith Quine created this Life Tributes page to make it easy to share your memories.

Send flowers to the Quine family.