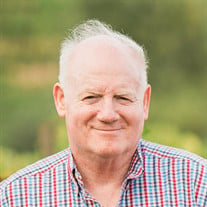 The “Holland Heights Gang” lost their founding member, Thursday, March 25th, when Daniel LeRoy McCaskill, age 73, left this earth to “boldly go where he has never gone before”. Daniel “Puddy” McCaskill was born March 1, 1948 in Sacramento, CA. He was the trailblazer, being the first born of 10 children to his unsuspecting parents, Dr. Daniel & Elizabeth McCaskill. The family moved to the Holland Heights area of Santa Rosa, CA in the 1950s which earned them the moniker “Holland Heights Gang” as the largest family on the hill. He was Santa Rosa educated all the way, attending St. Eugene’s Catholic School, Herbert Slater Middle School, and later Montgomery High School. This red-headed Altar server and boy scout kept parents, family, and teachers on their toes with his mechanical skills, technical prowess, and love of a good prank. A prime example being the time he presented his high school chemistry teacher with a small bottle of Wesson oil cleverly disguised as Nitroglycerin. While at Herbert Slater, he met his lifelong friend and “Blues Brother” Gordon Dixon. Daniel forever changed their lives when he brought Gordon home and made him a part of the family after Gordon was orphaned. They shared a bond of brotherhood along with a slew of cheap apartments, old jalopies, and enough adventures to write several Bestsellers. Daniel was the “Jake” to Gordon’s “ Elwood” and their friendship is best described with this quote from Groucho Marx, “When you're in jail, a good friend will be trying to bail you out. A best friend will be in the cell next to you saying, 'Damn, that was fun'.” Daniel attended the University of Illinois, at Champagne- Urbana in the late 60’s until he received his personal invitation to join the US Army in Vietnam. He served his country in the Air Force, however, as they had sent his draft notice to the wrong address and he enlisted in the time it took them to fix the mistake. He joined in February of 1969 and specialized in Inertial Navigation, working in a Strategic Reconnaissance Unit. He celebrated his 21st birthday in boot camp and ended up stationed in Mississippi in August of 69’ during Hurricane Camille, one of the strongest hurricanes of the 20th century. He was later stationed in Arizona and served overseas in Korea and Thailand, where he learned his unforgettable dance moves. He was honorably discharged in 1973 and began working for Litton Guidance Control in southern California. He met and married Julie, June 6, 1982 after pulling her out of a snow drift 3 months prior on a fateful skiing trip to Lake Tahoe. The couple settled in Redwood City, CA and successfully raised two children, Joseph and Juliana. In 1982, Daniel began working at Varian Associates launching his career in the semi-conductor industry of “Silicon Valley”. He started as a manufacturing engineer and worked his way into electrical engineering, eventually becoming a senior engineer designing systems and writing computer programs to streamline processes. At no point in his career did his job title or description match what he really did for his company. He was a triple threat--knowledge of manufacturing, electronics, and software with super IT skills that made him The Ultimate Mr. Fix-it. This led to him being sent around the world, more than once, at a moment’s notice to fix a system. His 16 years spent at Varian were forever remembered as the best of his career. He moved to Texas in 1999 to stop paying state income taxes and be closer to Gordon, who was living there at the time. Put simply, he stayed for the beef- prime rib, steak, and brisket in that order. In 2010, he graduated with highest honors from Tarrant County College, earning an Associate of Science Degree in Information Technologies at the age of 62. After which, he promptly retired to live the good life. He always loved Science fiction- everything from Andre Norton books to bad B-movies, but Star Trek impacted his life the most. The prospect of space exploration and the tantalizing glimpse of future technology captured his imagination and inspired his life. He picked the Air Force with the hopes of eventually making it into space. The closest he came was attending NASA Space Academy in Huntsville, AL. He had the time of his life being able to experience astronaut training, flight simulators, and even wearing THE suit of his dreams. His love of Math, Science, and his thorough understanding of chemistry earned him the thankless job of getting his brother through pharmacy school, his wife through nursing school, and his daughter and all her friends through middle school. Dan was preceded in death by his father, Daniel; his brother, Peter; and sister, Betty Ann. He is survived by Julie, his daughter Juliana, stepson Joseph, his mother, Elizabeth, his brothers Gordon, George, Michael, and Matthew and his sisters Margaret, Barbara, Maureen and Meagan as well as nieces and nephews. We will bid him farewell and send him off with our prayers on Monday, April 5, 2021. Starting with the Rosary 9:00AM at Lucas Funeral Home, 1601 South Main Street, Keller, TX and continuing with his Requiem Mass 10:30AM at St. Elizabeth Ann Seton Catholic Church, 2016 Willis Ln., Keller, TX. Finishing the day with lunch at his favorite Steakhouse. His Requiem Mass will be live streamed on the parish Facebook page for those unable to attend. We may have lost our father, brother, and friend but, Heaven gained their best IT man. His presence in our lives will be sorely missed and his memory will never be forgotten.

The family of Daniel LeRoy McCaskill created this Life Tributes page to make it easy to share your memories.

Send flowers to the McCaskill family.