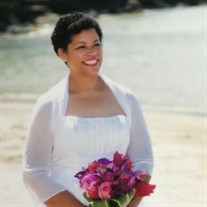 Dana Renee’ Campbell was born on November 29, 1960 in Los Angeles California to Doctor Edward E. Holden and Mrs. Ollie Malbreaux Holden. As a child, Dana was fond of watching cartoons such as David and Goliath and HR Puffin Stuff. She could often be found in her backyard chasing and catching lizards. Always good at numbers, while in the third grade, Dana told her mother that when she graduated College, her Mom, would be 50, and far too old to attend her graduation. Being excellent with numbers enabled Dana to excel with her school studies, ultimately graduating Valedictorian (Summa Cum Laude) from Xavier University in New Orleans Louisiana. It was during these college years (Freshman) that she met and later married Michael D. Campbell (from New York) in Los Angeles, California in 1986. Following college, Dana began her accounting career with the prestigious Public Accounting firm of Arthur Young and later worked for many multinational organizations. After marriage, the Campbells began an odyssey of adventures as their careers took them to such notable cities as Chicago Illinois, Atlanta Georgia, Williamsburg Virginia, and Long Beach California. During those adventures, Dana was an avid reader, excellent swimmer, and a true disciple of Jesus Christ, unapologetic in her love for her Saviour. A generous and nurturing person, Dana contributed, without fanfare to many charitable institutions, including the Salvation Army, Guiding Eyes for the Blind, and various Christian evangelistic and missionary works. She is survived by her spouse, Michael D. Campbell, Esquire, Mrs. Ollie Malbreaux Holden (mother); Sarah Malbreaux (aunt); Caroline Holden (sister-in-law); Kobe A. Holden (nephew); and Olivia M. Holden (niece). Dana is predeceased by Doctor Edward E. Holden (father), and Doctor Edward E. Holden, Jr. (brother). The Campbell and Holden families thank all of you for your attendance and express special gratitude to: Rehab Without Walls, Aspen Medical, Ms. Kayla Kellum, Mrs. Stella Kechi Okonkwo, Ms. Mayra Contreras, and Mrs. Rose Yemba for their caring services during Dana’s rehabilitation. You will always be fondly remembered for your love and care of our Dana.

Dana Renee&#8217; Campbell was born on November 29, 1960 in Los Angeles California to Doctor Edward E. Holden and Mrs. Ollie Malbreaux Holden. As a child, Dana was fond of watching cartoons such as David and Goliath and HR Puffin Stuff. She... View Obituary & Service Information

Send flowers to the Campbell family.