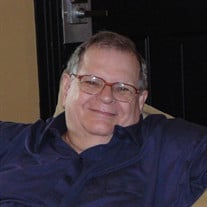 Dale P. Bowersock of Richland Hills, TX passed on Friday, November 27th at North Hills Hospital in North Richland Hills, TX at the age of 80. Dale was born in Toledo, Ohio and later moved to Tulsa, Oklahoma for a short time, after which his family settled in Fort Worth, TX in 1953. As a teen, Dale was an avid archer who captured the Texas state championship in June 1956 and competed in the National Field Archery Association tournament in Colorado Springs, CO the same year. Dale served in ROTC at Arlington Heights High School, during which he accepted the Fort Worth Star Telegram outstanding rifle team trophy from Amon Carter, Jr. in 1958. Dale attended Arlington State College where he continued his ROTC training and studied computer science and electronics. He completed his studies through La Salle Extension University. Dale also served as a member of the USAF 3610th Navigator Training Wing. Dale possessed exceptional mechanical and electrical talent and thrived on problem solving and working with his hands. His hobbies included building stereos, rifles, model rockets, model helicopters, computers and working on cars and boats. His children remember the times spent with their dad on a lake, at a gun range, or camping in Texas State Parks where Dale shared his intelligence, wisdom, and life lessons with his children. Prior to retirement Dale worked for the IRS providing tax guidance to the public. In retirement, Dale was especially fond of building and flying large scale RC model planes. Dale is remembered as a proud grandfather who enjoyed watching his grandchildren at sports events, and dance, band, choir, and theatrical performances. Dale had a practical nature, kind heart, and warm presence. He is dearly missed by those who knew and loved him. Dale is preceded in death by his mother, Dorothy Bowersock of Fort Worth, TX; his father, Roy Bowersock of Fort Worth, TX; and his sister, Betty Brooks of Ada, Oklahoma. Dale is survived by his son, Nico Bowersock, and daughter-in-law, Elaine Bowersock, of Fort Worth, TX; his daughter, Christina Kang, and son-in-law, David Kang; his grandchildren, Jacob Bowersock, Jenna Bowersock, Abigail Kang, and Annika Kang; his nieces and nephew, and their children, and grandchildren; and his partner, Janie Branscum, and her children and grandchildren. Dale’s wish is to be cremated and have his ashes scattered in an idyllic location in harmony with nature. He requested no funeral. In lieu of a memorial, Dale wanted his family and friends to gather in a private setting to remember the good times fondly. Due to COVID-19, this gathering will be planned for a later date.

Dale P. Bowersock of Richland Hills, TX passed on Friday, November 27th at North Hills Hospital in North Richland Hills, TX at the age of 80. Dale was born in Toledo, Ohio and later moved to Tulsa, Oklahoma for a short time, after which his... View Obituary & Service Information

The family of Dale P. Bowersock created this Life Tributes page to make it easy to share your memories.

Send flowers to the Bowersock family.