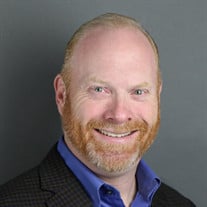 Craig Randall Calvery passed away peacefully at his home on October 5, 2021, after courageously battling Angiosarcoma cancer for 5 months. Craig was born May 3, 1970, in Dallas, TX. Craig grew up in Irving, TX and graduated from Irving High School in 1988. He was a beast of an offensive lineman and earned a full football scholarship to Louisiana Tech University. He spent the next 6 years in Ruston, LA playing football #Dawgsforlife. Even though football ended due to a knee injury, he continued to work for the athletic department as an advisor, while earning his BS in Business Administration in 1992 and an MA in Human Resources Management in 1994. He started his career in human resources for Federal Home Loan Bank in 1994. In 1995 he was set up on a blind date with Sue Brauer, the love of his life for the past 26 years. In 1997 Craig transitioned into the healthcare industry with a marketing position at Baylor Health Care System. He spent the remainder of his career in healthcare, working at Advanced Neuromodulation Systems (St. Jude Medical), Cooper Institute and SI Bone, where he developed lifelong friendships with many people everywhere he worked. While work was particularly important to Craig, his family always came first, he loved them completely. In 2000 Craig and Sue were blessed with their first born, Nicholas James and again blessed in 2003 with Cole Randall. Craig spent countless hours coaching and watching little league baseball, football, and basketball, and loved the occasional golf game with them both. Since 1999 their home has been in Colleyville, where they formed many lifelong friends; from incredible neighbors, friends made through school or sport activities, and at Compass Christian Church their church home for the past 10 years. Craig was the best husband, father, brother, friend, and co-worker. Craig was preceded in death by his mother, Gloria Jean Little Calvery, his father, Robert Lee Calvery, his grandparents Ila Mae and James Little, and his mother and father-in-law, Marilyn and Walter Brauer, who loved him like their own. He leaves behind his wife of 23 years, Sue Brauer Calvery, sons Nicholas James Calvery and Cole Randall Calvery, his brother Chris Calvery, his uncle Jim Little, his brothers and sisters in law, Dave and Kit Brauer, Ken Brauer, and Julie and David Cope, nine nieces and nephews, and numerous cousins and friends, all who he loved dearly. A Celebration of Life Service will be held on Monday, October 11 at 11AM at Compass Christian Church in Colleyville, TX with interment to follow at Bear Creek Cemetery in Euless, TX. There will be a reception following. In lieu of flowers donations may be made in Craig’s name to Bear Creek Cemetery online at http://bearcreekcemetery.com/ or to P.O. Box 414, Euless, TX 76039 OR Angiosarcoma Awareness at www.cureasc.org.

Craig Randall Calvery passed away peacefully at his home on October 5, 2021, after courageously battling Angiosarcoma cancer for 5 months. Craig was born May 3, 1970, in Dallas, TX. Craig grew up in Irving, TX and graduated from Irving High... View Obituary & Service Information

The family of Craig Randall Calvery created this Life Tributes page to make it easy to share your memories.

Craig Randall Calvery passed away peacefully at his home on October...

Send flowers to the Calvery family.