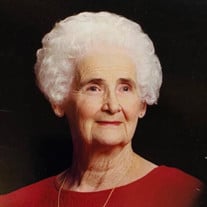 Colleen Landers was born on October 29, 1924 in Wellington, Kansas to the late Ralph and Opal Holt. She passed away on December 29, 2020 in Willow Park, Texas. She graduated from Denver City High School in Denver City Texas in 1943 and after graduation moved to Fort Worth. She married Lewis Landers in November 1943. In the early 1970’s she started her own business as a Poodle Groomer and Breeder. She continued her self-employment until she was well into her 80’s. Her business was strong and she had a solid client list for over 30 years. She was a member of Gideon Baptist Church, Bethel Baptist Church and became a member of Grace Baptist Church in Fort Worth in November of 1999. Where she served as a faithful in intercessory prayer, Bible study, and church attendance. She was accomplished in the study of genealogy and traced and documented her family roots. She traced her father back to 1748 and her mother’s family back to 1132 in Devonshire England. All this work completed prior to the internet. She lived in Benbrook for 58 years. She had a younger sister Joyce Nelson who preceded her in death in 1997. She is survived by her children, Taresa and Jim Lucas, Tim and Theresa Landers, and Joy and Ed Carter; Grandchildren: Robby Williams, Bobby and Jennifer Lucas, Jimmy and Jennifer Lucas, Nicole and Boyd Shannon, Timmy and Lisa Landers, Shelby Landers, Holly and Kurt Schaal, Carly and Alex Burnette, Michael and Ronda Carter, Steven and Brandi Carter, Heather and Jake Powell, and David Joseph Carter; Great Grandchildren: Lauren Williams, Abigail Lucas, Ryan Hunter, Nathan Lucas, Madeline Lucas, Peyton Shannon, Lucas Shannon, Holton Landers, Max VanWey, Luke Schaal, Grant Burnette, Brooklynn Burnette, Ross Burnette, Eleanor Burnette, Nicki Nichols, Cameron Carter, Jacob Carter, Matthew Carter, Caden Carter, and Jase Powell. A Celebration of Colleen’s life will be held at 11:00 A.M., Friday, January 8, 2021 at Grace Baptist Church located at 1501 Jim Wright Freeway, Fort Worth, Texas 76108 with private family burial to follow. Please follow the link below to view the celebration of life service for Colleen Landers. https://vimeo.com/496896314

Colleen Landers was born on October 29, 1924 in Wellington, Kansas to the late Ralph and Opal Holt. She passed away on December 29, 2020 in Willow Park, Texas. She graduated from Denver City High School in Denver City Texas in 1943 and after... View Obituary & Service Information

Send flowers to the Landers family.