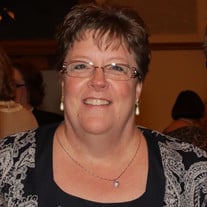 Christine Elizabeth “Tina” Sawall was called home by her Lord and Savior Jesus Christ during the early morning hours on Tuesday, December 14, 2021, after a courageous year-long battle with cancer. Tina, as she was affectionately known by her family and multitude of friends, was born March 7, 1961 in St. Louis, Missouri, the fourth of five children of Ralph and Mildred Turley. In 1963, she came with her family to Bedford, Texas when her dad relocated as an air traffic controller. In her 20’s, she worked as a personnel clerk for the United States Postal Service in Fort Worth. Subsequently, she graduated from Tarrant County Community College with an Associates Degree. Since 1999, she was the owner of Dynamic Embroidery, where she provided quality branded apparel and other products to wholesale and retail customers. In August of 1985, she married the love of her life, Paul. Together, they shared a happy home with their three children, Blake, Tanner and Natalie in Hurst, Texas. Tina was known as “the fun aunt” by her numerous nieces, nephews, grand-nieces and grand-nephews, many who saw her nearly every day. She was also known as the life of the party. She would always be the first to arrive and the last to leave – lighting up the room when she entered. She was the ultimate “never knew a stranger.” Tina was famous for an annual tradition where she made her homemade thin-crust pizza pies for Thanksgiving evening to be eaten by all the immediate and extended family while they watched “Christmas Vacation.” Her favorite hobby was documenting her family’s life while going away with her best friends to various towns on scrap-booking weekends. She was a faithful Christian, and a member of Messiah Lutheran Church, Keller, Texas for over 30 years, where she served as a member of the altar guild. She was preceded in death by her parents, Ralph and Mildred Turley. She is survived by her husband, Paul Sawall of Hurst, Texas; her sons, Blake Sawall of Fort Worth, Texas and Tanner Sawall of Milwaukee, Wisconsin; her daughter, Natalie Sawall of Hurst, Texas; her sisters, Cynthia Perkins (John) of Flower Mound, Texas and Susan Brandt (Bill) of Southlake, Texas; her brothers, Bruce Turley (Jeannie) of Lake Worth, Texas and Brian Turley (Tina) of Cleburne, Texas. Viewing will be held at Messiah Lutheran Church, Keller, Texas, on Friday, December 17th from 5:00 pm – 7:00 pm. Funeral services will be held at Messiah on Saturday, December 18th, at 11:00 am. Memorials may be made to Messiah Lutheran Altar Guild. Final Resting Place will be Bluebonnet Hills Memorial Park, Colleyville, Texas.

Christine Elizabeth &#8220;Tina&#8221; Sawall was called home by her Lord and Savior Jesus Christ during the early morning hours on Tuesday, December 14, 2021, after a courageous year-long battle with cancer. Tina, as she was affectionately... View Obituary & Service Information

The family of Christine Elizabeth Sawall created this Life Tributes page to make it easy to share your memories.

Christine Elizabeth “Tina” Sawall was called home by her Lord...

Send flowers to the Sawall family.