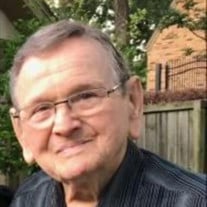 Chester Burnett, known to all as Chet, went home to be with the Lord on December 3, 2021 at 89 years old. Born on June 19, 1932 in Akron, Ohio to Earl and Marjorie Burnett, Chet was raised in Portage Lakes, Ohio, spending many hours fishing, swimming, and racing boats on the lakes. He played the position of catcher on the high school baseball team and had a lead part in the senior year play, all the while serving as president of his senior class. After high school graduation, he attended The University of Akron where he was a member of the social fraternity Phi Delta Theta, obtaining a Bachelor’s Degree in Business. Chet joined the Air Force in the December of 1954. He completed his undergraduate training in navigation. Serving in a variety of jobs in the military, he served in the position of Commissary Officer and oversaw Mitchell Hall, the cadet dining hall, as an Officer in Charge at the Air Force Academy. He flew as a navigator on the first nuclear bomber, the B-66. Assigned to a base in Thailand, he served in the Vietnam War, receiving the Bronze Star. While running Mitchell Hall, he was subject to a military recall and resumed active service as a radar navigator bombardier on the B-52. After retiring from twenty years of service in the Air Force as a Major Officer, Chet worked another twenty-six years for The Southland Corporation and Land O’ Frost, retiring finally at 62. During retirement, he loved to travel, spend time with family and friends, and was involved at his church, First Baptist Colleyville. Chet met and married his first wife, June Hoelscher, while stationed at Harlingen AFB they had three daughters. June passed away while they were overseas during their sixth year of marriage. Chet received a hardship assignment to Harlingen AFB to be near relatives, this is where he met and married Jo Jo Marshall. They had two daughters and were married for 59 years. Together they raised five daughters and made friends around the world. Chet is survived by his wife, Jo Jo Burnett, and his five daughters and their spouses: Melanie and Mark Moseley; Lisa Hall; Jennifer and Rick Vannoy; Carolyn Burnett; and Rebecca and Mark Ritchie. He is also loved by twelve grandchildren, eleven great grandchildren, two nieces, and three cousins. He is predeceased by his wife June Burnett, his parents Earl and Marjorie Burnett, his sister Betty, and her husband, Jim Davis. A Celebration of Life Service on December 17th will take place at 1:00 PM at First Baptist Colleyville, Colleyville, Texas. Reverend Rick Vannoy will officiate the Celebration of Life Service. Pallbearers are his grandsons - Jeremy Hall, Justin Vannoy, Nathan Vannoy, Rick Vannoy, Brandon Ritchie - and Chet’s best friend, Kenneth Fanning. Lucas Funeral Home in Hurst will take charge of the arrangements.

Chester Burnett, known to all as Chet, went home to be with the Lord on December 3, 2021 at 89 years old. Born on June 19, 1932 in Akron, Ohio to Earl and Marjorie Burnett, Chet was raised in Portage Lakes, Ohio, spending many hours fishing,... View Obituary & Service Information

The family of Chester Burnett created this Life Tributes page to make it easy to share your memories.

Chester Burnett, known to all as Chet, went home to be with the...

Send flowers to the Burnett family.