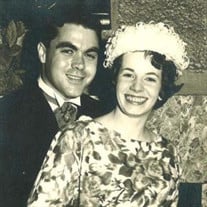 Charles Joseph Koopmann passed away on December 5, 2021, in Grapevine, TX at the age of 83. He was born in Lake Forest, IL on March 26, 1938, to Charles J. Koopmann and Mary Ann Yore Koopmann. He was the oldest of three with two younger sisters: Gail Okon and Carole Delany. It was in Lake Forest that he met Dorothy Margaret Poll, a young Englishwoman who was working in Lake Forest as a Nanny. Her plan to travel the world ended quickly once Charles and Dorothy met at a bowling alley and then married on November 11, 1961. Together they had 4 daughters, Deborah, Laura, Bonnie, and Beverly. They lived in several states including Illinois, Florida, Virginia, Texas, Michigan and then moved back to Texas where they lived in Grapevine for 39 years. Charles was a proud American and honorary Texan. He worked hard growing up with jobs including newspaper delivery, locker room attendant, caddie, Fireman and served in the National Guard and the US Army. Their growing family started traveling across the US with his positions at Culligan Water and Kroger, where he ultimately ended his career of 23 years as a meat plant manager, successfully navigating several tough union negotiations and meat plant reorganizations. He went by many names – CJ, Charles, Chuck, Daddy and Papa. He loved to garden and had several hobbies over the years including aquariums, candles, making wine, a vast beer can collection, entering sweepstakes, pottery, and many DIY projects including installation of wood and tile floors at the house. Charles and Dorothy volunteered at a local nursing home for years, visiting the residents and bringing weekly cupcakes and birthday cakes. He proudly retired just shy of his 60th birthday and quickly put his energy into becoming the world’s biggest fan of his grandchildren. He attended every school and sporting event until they moved on to college and jobs. Then he became the universities’ biggest fans and would rotate college baseball hats every time he left the house and at family events, sometimes bringing multiple hats to switch out throughout the day to not show favoritism. He kept every card they ever gave him. He easily made friends around town and with the doctors and nurses that we met throughout the last year. Even the pharmacist would ask about him and his health when you picked up a prescription for him. He was a frequent coffee drinker and lottery ticket purchaser at Yates Corner grocery and spent many early mornings driving around Lake Grapevine observing the deer and other wildlife and talking to the “Deer Crew” as we liked to call them. He is survived by his wife of 60 years, Dorothy Margaret Poll Koopmann; 4 daughters and sons-in-law, Deborah (James) Koopmann, Laura (Stephen) Turner, Bonnie (Kevin) Jones, Beverly (Jerry) Gambell; 13 grandchildren, Kimberly (Brandon) Campbell, Emily Koopmann, Caleb (Elizabeth) Koopmann, Ashly (Joshua) Nezbeth, Lily Koopmann, Jacob Koopmann, William (Chloe) Jones, Jesse Jones, May Jones, Baden Jones, Rachel (Jackson) Massanelli, Taylor Gambell, and Julia Gambell; 5 great grandchildren, Malkiel Campbell, Benaiah Campbell, Kinnereth Campbell, Gabriel Campbell, David Nezbeth; sisters, Gail Okon, Carole (Phillip) Delany; and nieces and nephew, Janet Kerkow, Julie Cuy, Christy Richardson, Carrie Busch, and Phillip Delany. He is preceded in death by his parents, Charles J Koopmann and Mary Ann Yore Koopmann.

Charles Joseph Koopmann passed away on December 5, 2021, in Grapevine, TX at the age of 83. He was born in Lake Forest, IL on March 26, 1938, to Charles J. Koopmann and Mary Ann Yore Koopmann. He was the oldest of three with two younger sisters:... View Obituary & Service Information

The family of Charles Joseph Koopmann created this Life Tributes page to make it easy to share your memories.

Charles Joseph Koopmann passed away on December 5, 2021, in Grapevine,...

Send flowers to the Koopmann family.