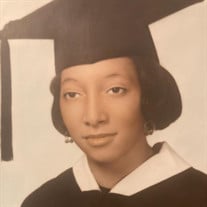 Celeste Kirk affectionately called “Bunny” during her final years of high school was born on October 26th 1952 and she departed this life on June, 18th 2022. Celeste loved learning and she excelled academically and athletically at Andrew Jackson High School. She ran track for AJHS and P.A.L. (Police Athletic League) where she was a fierce competitor winning numerous medals and trophies. After graduating high school Celeste attended Queens College where she received her Bachelor's Degree and she continued her studies at St John's University where she received her Master's Degree. Celeste spent her entire working career at NYTelco/Verizon in New York, New Jersey and Texas which spanned over 40 years. She worked in various technical, staff and managerial positions where she received numerous accolades, Awards and commendations for her service, contributions, responsible leadership and positivity which she brought to the workplace. Celeste was an avid traveler having visited most of the United States and continents and she loved to sing and dance. Celeste also loved an excursion (casino). Celeste was a born nurturer. She was compassionate and forgiving and she loved hard. She was very generous with both her time and resources supporting family and friends and their Lifestyles, choices and circumstances. Celeste always prayed for you and she celebrated your momentous occasions. Celeste believed in God the Father Almighty and she read her Bible and prayed daily holding her rosary. When her health was declining and the discomfort unbearable at times she never lost faith or stopped believing. Her favorite scriptures were John 14, Psalm 23 and Psalm 27. Celeste was married to the late Donald Gray, her devoted husband. She was the daughter of the late Annie and Charles Kirk, the granddaughter of the late Alberta G. Dent and the god daughter of the late Zee and Sammie Tate. Celeste leaves behind to cherish her memory her devoted son, Andre Donnell Gough Gray, two siblings (Charles J. Kirk and Alberta James), her sister-in-law (Kay Kirk), three grandchildren (Celeste, Dana, Serenity, and a fourth baby on the way), two nieces, one nephew, aunts, uncle, cousins, a host of extended family and a community of loyal friends. Celeste was a rare precious gift and she will be laid to rest in the Gough family cemetery.

Celeste Kirk affectionately called &#8220;Bunny&#8221; during her final years of high school was born on October 26th 1952 and she departed this life on June, 18th 2022. Celeste loved learning and she excelled academically and athletically... View Obituary & Service Information

The family of Celeste Kirk created this Life Tributes page to make it easy to share your memories.