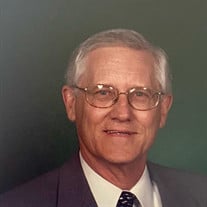 A memorial service for Cecil Wood will be held on Tuesday, June 7 at 11:00 a.m. at Living Word Lutheran Church in Grapevine, Texas. Burial with military honors will follow at 2 p.m. at Dallas - Fort Worth National Cemetery in Grand Prairie, Texas. His family will greet friends at Lucas Funeral Home in Grapevine, Texas on Monday, June 6 from 4 p.m. to 7 p.m. Cecil Wood, 79, was born in Colorado Springs, Colorado, on April 27, 1943, the second of four children to Ivy Paul and Vallie Wood. He passed away on May 23, 2022 in Grapevine, Texas. He was preceded in death by his father, Ivy Paul Wood and his brother, Ray Wood. Cecil leaves behind his loving wife of nearly 59 years, Judy, their two children, Mike Wood, married to Dianna and Sheri Phillips, married to Steve, four adoring granddaughters, Jennifer, Emily, Savannah and Gracie, his mother, Vallie, brother, Don and sister Glenda. He graduated from the University of Oklahoma ROTC and was commissioned into the United States Army in 1966. After serving as 2nd and then 1st Lieutenant in the 82nd Airborne Division for active duty, he joined the reserves as a Captain in the 101st Airborne Division of special forces. Once leaving active duty, Cecil worked for General Motors for nearly 20 years, leading his family to live in several states across the midwest and eventually leading them to Texas, where he retired from the company. He then went on to work at Toyota of Irving for more than 20 years. Cecil enjoyed working in his beautiful yard, building things for his family in his pristine garage and supporting his kids and grandkids in their passions. He loved music, especially the blues. He knew the Lord and was active in several churches throughout his life. He never met a stranger and never left a new place without a friend. He knew every one of his neighbors by name and was often found helping them with cleaning out their gutters or mowing their yard. Every person he met was better for knowing him and those who love him will strive to continue his legacy of unending compassion, unwavering patience, unceasing love and always putting family first. We can all take comfort in knowing he is in paradise with his savior, where we will see him again one day.

A memorial service for Cecil Wood will be held on Tuesday, June 7 at 11:00 a.m. at Living Word Lutheran Church in Grapevine, Texas. Burial with military honors will follow at 2 p.m. at Dallas - Fort Worth National Cemetery in Grand Prairie,... View Obituary & Service Information

The family of Cecil Paul Wood created this Life Tributes page to make it easy to share your memories.

A memorial service for Cecil Wood will be held on Tuesday, June...

Send flowers to the Wood family.