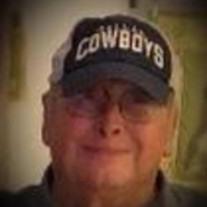 Cary D. Gist November 29, 1935 – October 9, 2021 Cary Dale Gist, 85, passed away on Saturday, October 9th, 2021 in Fort Worth. He was born November 29th, 1935 in Rio Vista, Texas to Colman and Lillie Grubbs Gist. Cary spent the last 30 years with his wife, Colleen Gist. He was a member of the Church of Christ. He served his country in the US Army and ended his service with a Certificate of Achievement. Cary always said he was a “jack of all trades but a master at none”. If you were to ask anyone, they would agree he was indeed a master at most. His professions included: Peanut Farmer, working with Union Pacific Railroad, attended Preacher Training School, and became a Pastor, Drug and Alcohol Counselor, and lastly, one of the best carpenters around. Mr. Gist is survived by his wife, Colleen, 2 sons, Perry Gist (Julie), Mike Gist (Dereca) and 2 daughters, Caroline Milner, and Angela Gist-Cook. 11 grandchildren, Travis, Megan, Jack, Harrison, Truman, Will, Sam, Max, Ben, Kelsey and Laila. 3 great grandchildren, Dallys, Leo, and Ivy. Cary is also survived by numerous nieces, and nephews. He was preceded in death by his parents, sisters, Don Kathryn, and Vera, brothers, Calvin and Robert, and Son, Brad Gist. A private service was held for Mr. Gist. The family would like to thank Landmark Medical Care, Clinical Bridges Care Management, and all of his doctors and nurses at Texas Health Harris Methodist Hospital for their care of Cary.

The family of Cary Dale Gist created this Life Tributes page to make it easy to share your memories.

Send flowers to the Gist family.