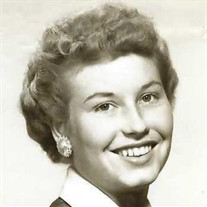 Carol Warrington McBride, 84 of Fort Worth, Texas passed away July 23, 2021 at Community Hospice of Fort Worth. Carol was born in Trenton, Texas and was raised on a farm there until high school when her family moved to Fort Worth. She was a graduate of Polytechnic High School class of 1955 and then married her husband Marshall McBride in 1956. They lived most of their lives together in Texas, however they lived for short periods in Nebraska, North Dakota, Washington and Arizona. Carol worked for S&H Green Stamps for many years but her greatest joy was being a mother for her children. In addition to serving as an avid baseball mom who showed up for every game, Carol served as the official chauffer for her daughter and her friend’s activities. Their home was an open place for many friends and kids to gather and many found Carol cooking, doing cross stitch, reading and watching films there. In her later years, her greatest joy was her grandchildren. She enjoyed spending time with them and going to all of their activities. She introduced her grandson Christian to the joys of reading and watching films and spent countless hours with her granddaughter Emma watching Emma’s favorite two movies on loop. Carol and Marshall moved with their daughter’s family to serve as loyal grandparents, always ready to take on the kids when needed. Carol was preceded in death by her parents Cleveland and Dixie Warrington, her sister Jewel Adams, her sister Vernell Lewis, her husband Chuck Lewis and brother Donald Warrington. She is survived by her husband of 64 years Marshall McBride, her son Curtis McBride, his wife Kelley McBride, her daughter Terry Childress, her husband Billy Childress, grandson Christian Childress, granddaughter Emma Childress, granddaughter Lauren Burrell, her husband Jeremy Burrell and a great grandson Braden Burrell. A memorial service will be held at Lucas Funeral Home in Keller on August 2, 2021 at 2 pm with visitation at 1 pm prior to the service. A family service will be held at DFW National Cemetery at a later date. The family asks that donations be made to Community Hospice of Fort Worth in lieu of flowers. Click here to watch the Recorded Service.

Carol Warrington McBride, 84 of Fort Worth, Texas passed away July 23, 2021 at Community Hospice of Fort Worth. Carol was born in Trenton, Texas and was raised on a farm there until high school when her family moved to Fort Worth. She was a... View Obituary & Service Information

The family of Carol Warrington McBride created this Life Tributes page to make it easy to share your memories.

Carol Warrington McBride, 84 of Fort Worth, Texas passed away...