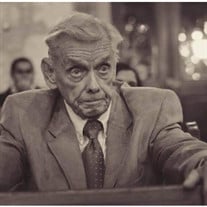 Chuck Crone Life Biography When World War II in its 4th month, and everything was directed towards the war effort. Lots of things were being rationed such as gasoline, tires, sugar, silks, and cars. Car manufacturing stopped from 1942 to 1946... View Obituary & Service Information

The family of Carmon Ferdinand "Chuck" Crone created this Life Tributes page to make it easy to share your memories.

Send flowers to the Crone family.