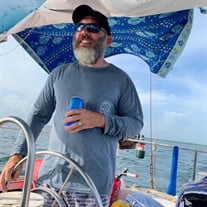 Roka and Sherri Wolgamott gave birth to their beloved son, Brodie Leonard Wolgamott, on May 26, 1971. Brodie died unexpectedly on Sunday, July 11, 2021, at 11:38pm due to injuries sustained in a motorcycle accident. Brodie was the most complicated simple person around. His extraordinary authenticity, his relishing of all the fun that life had to offer, his straightforwardness, his deemphasis on material wealth, his ability to live in the moment, and his pure unadulterated joy when around people who wanted to live life to the fullest in whatever they were doing made him the ultimate “what you see is what you get.” He started life in the small town of Mineral Wells, just 60 miles west of Fort Worth, where his parents met. He moved around with his family before they settled in Grapevine, where he attended school from kindergarten to high school graduation at Grapevine High School. He then entered the US Army in 1990 where he served as an infantryman in Germany. After the Army he returned to school in 1993 earning his Bachelor of Business Administration - Marketing from the University of North Texas in 1997. He held a number of jobs before settling with Temerlin McClain Advertising producing multimedia projects for a year and a half. Shortly thereafter he followed his father’s footsteps and became an appraiser with his Dad’s company, Northeast Tarrant County Appraisal services. After Roka passed away Brodie took over the business, later becoming NET Appraisal Service. Brodie married the first woman he ever dated, Christy Wolgamott. They were married 21 years of their 31 years together. They had plenty of travels to the state of New York to visit Christy’s big Italian family, and lots of laughs and good times all around. They have one daughter together, Jenna Wolgamott. He later married Lisa Dominy, who joined him on several adventures. There was never telling where life was going to take them! However, no offense to his Mom, Sherri, his first wife, Christy, or his second wife, Lisa, we all know his daughter Jenna was the true lady love of his life. Brodie glowed when he talked about his Jenna. His many hobbies included earning a third degree black belt in Goju-Ryu Karate. He was a volunteer EMT/ firefighter with the Haslet Fire Department. He helped start a Crossfit group. He rebuilt classic cars. He restored a sailboat that had sunk, lived in it, and sailed it down the Florida Atlantic coast to Key Largo. When Jenna was younger, he built a custom camper for his daughter and he to travel with their Indian Princess group. He was in the process of renovating an RV to travel the country. Brodie was a true jack of all trades. Whether it was computers, films, creative arts, motor vehicles, carpentry, sparring, or passionately living life to the fullest, Brodie dabbled in it all. He was as at home talking to adults as he was with kids - mostly because he was a big kid himself. It was important never to take Brodie with you to meet a group of your friends unless you were willing for suddenly everyone to prefer his company to yours. He was always so much fun, and he made everything better by being there. He was always a risk taker, even as a little kid. He loved feeling alive, of feeling challenged, of doing something new, sharing laughs, and experiencing joy. The great fear that had him looking over his shoulder more than any other was the fear of being bored, of being stuck in a rut, of feeling trapped. Brodie lived life according to the great Hunter S. Thompson quote: “Life should not be a journey to the grave with the intention of arriving safely in a pretty and well preserved body, but rather to skid in broadside in a cloud of smoke…loudly proclaiming, “Wow, what a ride!” We will all miss Brodie terribly. He leaves a huge unfillable hole in our hearts. We take comfort in knowing he’s gone on to be with his family waiting for him with big grins on their faces in Heaven, where his Dad will be the first one to greet him and they can both trade their infectious laughs together once again. Brodie will forever be remembered by his daughter Jenna, wife Lisa, former spouse Christy, Mom Sherri, brother Rocky and his wife Paula, Brother-and-Sister-in-law Kevin and Laura Formes, his nephews Dean, Bladen, Kelin, and nieces Berkley and Morgan, and fur baby Sissy. Brodie was preceded in death by his father Roka and his Aunt Sandee. A life so vibrant deserves a special celebration. To honor the life of Brodie at his “FUN”eral, leave your sadness at the door, and bring your stories, memories, and happiness to share.

Roka and Sherri Wolgamott gave birth to their beloved son, Brodie Leonard Wolgamott, on May 26, 1971. Brodie died unexpectedly on Sunday, July 11, 2021, at 11:38pm due to injuries sustained in a motorcycle accident. Brodie was the most complicated... View Obituary & Service Information

Send flowers to the Wolgamott family.