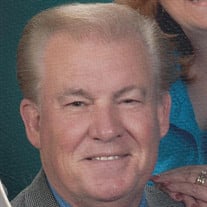 Bob L. Henderson of Bedford, passed away on December 20, 2021 at the age of 79 years, following a long battle with Alzheimer’s Disease. Bob was a lifelong resident of the mid-cities area and a graduate of Birdville High School, where he played and enjoyed football. Bob also attended and played football at the University of Arkansas and was an avid Arkansas Razorback, Dallas Cowboy, and Texas Rangers fan. Bob travelled with his wife Gayle every opportunity he had and loved to play dominoes and go bird hunting. He was very interested in politics and kept informed by reading the newspaper, which his beloved Labrador, “Bebe Girl”, brought to him every morning. Bob worked at Clairol for 32 years in retail and professional divisions of Bristol Myers Squibb. He had a very successful career in sales, management, marketing and public speaking. In 1998, Bob retired and 4 days later he achieved his life long dream of joining his wife at the business she had started, Panache Systems. Bob and Gayle worked tirelessly to make their business successful at Panach Systems, a wholesale professional beauty distributor in Euless which continues to operate and thrive to this day. Bob is survived by his wife of 28 years, Gayle Henderson of Bedford. His daughter, and son-in-law Shelly and Jerry Stanforth of Orlando, Florida, His step-daughter and son-in-law Crystal and Troy Pihowich of Edmonton, Alberta, Canada, his sister-in-law, Debbie Scott, son Scott Henderson, 6 grandchildren and 3 great grandchildren. He is pre-deceased by his mother and step-father Ellen and Jimmy George Jr., his father and step-mother, Johnny and Irene Henderson, brother-in-law Donnie Scott, father-in-law Zane Hewko and his beloved Labrador, Bebe Girl. A celebration of his life will be held at Lucas funeral Home in Hurst on January 15, 2022 at 2:00PM. In lieu of flowers, please make donations to the Alzheimer’s Association of North Central Texas or the American Diabetes Association. Click here to watch the Recorded Service.

Bob L. Henderson of Bedford, passed away on December 20, 2021 at the age of 79 years, following a long battle with Alzheimer&#8217;s Disease. Bob was a lifelong resident of the mid-cities area and a graduate of Birdville High School, where... View Obituary & Service Information

The family of Bob L. Henderson created this Life Tributes page to make it easy to share your memories.