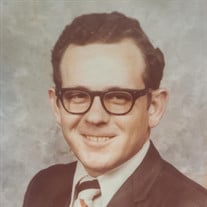 Billy Joe Ennis was born June 6, 1940, the third son of Arson H. and Evelyn Ennis Billy graduated Olney, OK. High School in 1958. Billy attended Eastern Oklahoma A&M for a year before enrolling at Draughon's Business School to study accounting. He met Louisa Satterwhite there in 1960. They married in 1962. They welcomed 3 children into the world, Jolene Graham, Brian Ennis and Benjamin Ennis. He had 6 grandchildren, Kaitlyn Batting, Serena Ennis, Tabitha Ennis, Brien Ennis, Savannah Rhea and Nicholas Mungioli as well as 1 great grandchild, Reagan Rhea. He is preceded in death by his parents, Arson and Evelyn Ennis, brother Curtis Ennis, sister, Doris Jean Roberts and his grandson, Nicholas Mungioli. Billy grew up on a farm outside Coalgate, Oklahoma, with 3 brothers Curtis Ennis, Willie Ennis, and Jerry Ennis with sister, Doris Jean Roberts. The family often went into Coalgate on weekends for supplies that were mostly purchased at Hudson's Big Country Store. After graduating from Draughon's, he began his working life as an accountant in the oil and gas industry. He then purchased a service station which he owned and operated for many years. He then worked with Eastman Kodak, transferring to their home office in Rochester, NY. He retired from Kodak in 2007, moving the family back to Texas, settling in Hurst, TX, in 2010. He resided in Hurst until his death February 22, 2022. On Tuesday, March 1, 2020 at 6:00 p.m. a Live Stream of Billy Ennis’s Celebration of Life will be viewable here https://video.ibm.com/channel/DURgpAb2EXm

The family of Billy Joe Ennis created this Life Tributes page to make it easy to share your memories.

Send flowers to the Ennis family.