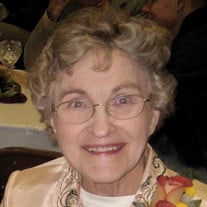 Bettye Jo West Wiley, 90, beloved wife, mother, grandmother, and teacher, passed away on Feb. 13, 2022. Bettye Jo West was born in Fort Worth, Texas on September 5, 1931. She was the oldest child of Mary and Durward West. She grew up with brothers Dwayne and Steve on the West family dairy farm at what is now North Beach Street and Watauga Road. Each day began very early and there was no shortage of chores. Although the children took turns using the same bathwater, Bettye got to go first, before her two brothers. As well as her brothers, she was very close with her cousins, Charlene and Robert West, who lived across the road. Education was always an important part of her life. She finished at the University of Texas with a degree in Home Economics, and had many fond memories of her college days as student and a member of the Gamma Phi Beta sorority. Following college she married and moved to California where her daughter Cynthia (Cindy) Morgan was born. The family returned to Fort Worth where Tim (Morgan) was born. After her divorce Bettye Jo and the children returned to live on the family farm. They recall that family gatherings at the farm were always an event. As a divorced, single mom, she obtained her Masters in Education from what is now the University of North Texas in Denton and began her teaching career in Science and Home Economics for the Fort Worth Schools. As the story goes, Bettye Jo hosted a bridge game and invited her friend’s brother, Gene Wiley. Gene not only had beginner’s luck at cards that day, but won Bettye Jo’s hand in marriage on Thanksgiving Day, 1962. Son David arrived a year later. Bettye Jo was dedicated to her family, church, community and home life, and to helping others do the same. The family lived in the house she owned on Scranton Drive and were members of what is now City Point United Methodist Church. As her children grew she supported their activities. Although she couldn’t carry a tune, she loved her children's music performances and supported their musical interests. She helped Cindy and David join Texas state choirs, and she and Gene had tickets to every home football game to watch Cindy and Tim play in the marching band. She was very active in Tim’s scouting career, from Den Mother to teaching him to use the sewing machine for costumes. Later she took joy in attending her grandchildren's school concerts and plays. She brought that love of teaching and learning to her career in and passion for home economics, now known as family and consumer sciences. She was very active in the local Home Ec chapter, and served as a cooking judge at fairs around the region. She began demonstrating the latest technology in appliances, including the brand new microwave oven and the earliest food processor, known as “La Machine.” A wonderful cook and host, she was the cornerstone of many memorable holiday dinners. She always seemed to get them on the table at the appointed time. Anyone in the kitchen remembers her meticulous lists - menus, attendees, every detail in order. She kept a notepad in the car and wrote down all of the travels, the mileage, how much gas they bought. And long before email or social media, she served as a nerve center for the extended family, often checking on others and passing on family news. Family and friends remember her joy and humor, her love of games (and her skill). She loved UT – when their band played on TV she would stand up in the den and raise the hook-’em horns sign. Later in life she and Gene enjoyed travel and they celebrated 59 years of marriage this past fall. Survivors include: Husband Gene Wiley, brother Dwayne West and his wife Beverly, her children Cindy, Tim, and David, her grandchildren Ashley Morgan-Olvera, Ben and Jamie Coukos-Wiley, Erik Miles, Kelly Wier, and Miki Kabilio and their families, and many beloved nieces, nephews, cousins and their families. Memorials: Should friends desire, they can make gifts in her memory to the Alzheimer’s Association • https://www.alz.org/northcentraltexas?set=1 or City Point United Methodist Church • https://www.citypointumc.org/online-giving-2/ in lieu of flowers. (And they also can consider making food for someone in need of some love!)

Bettye Jo West Wiley, 90, beloved wife, mother, grandmother, and teacher, passed away on Feb. 13, 2022. Bettye Jo West was born in Fort Worth, Texas on September 5, 1931. She was the oldest child of Mary and Durward West. She grew up with... View Obituary & Service Information

The family of Bettye Jo Wiley created this Life Tributes page to make it easy to share your memories.

Send flowers to the Wiley family.