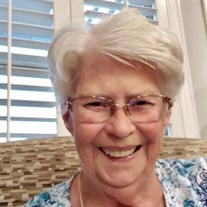 Betty Lou Miller Ohman went to be with her Heavenly Father on April 6, 2022 at Universal Hospice in Fort Worth, Texas surrounded by her family. She was two weeks shy of celebrating her 88th birthday. Betty was born April 17, 1934 in Bellefonte, Pennsylvania to the late Merrill and Grace Miller. After graduating from Bellefonte High School, Betty moved to California where she met and married the love of her life Allan Bratt Ohman on May 1, 1965. The newlyweds moved to Irving, Texas the next year and had their son, Allan Bratt Ohman, Jr. Betty enjoyed being a homemaker while Allan was young. She busied herself by volunteering at both her church and the school. She eventually went back to work as a bookkeeper in Irving and Dallas. She enjoyed her time at Quality Sausage and Exxon Mobil even after retiring once. In her spare time, she loved to cross stitch, quilt, and do word searches and puzzles. Betty was an active member of the Latter-Day Saints Irving Ward and later the Keller Ward. She served in several callings, but always said she enjoyed the nursery the most. She taught cross stitch, candy making, and quilting to the Relief Society over the years and made countless baby blankets for the local children’s hospitals. Betty lived most of her adult life in the house that she and Al bought when they moved to Texas. She spent her later years in Keller at the Evergreens and then Mustang Creek Estates to be near Allan, Mary and her grandchildren. Betty is survived by her son: Allan Ohman, Jr. and his wife, Mary, of North Richland Hills, Texas; her two grandchildren: Christopher Ohman of North Richland Hills, Texas and Lauren Ohman of Davis, California; her sister, Gladys Rotwitt and her husband Ted of Landsdale, Pennsylvania; her sister-in-law Mary Alice Miller of Rebersburg, Pennsylvania; and numerous nieces and nephews. She is preceded in death by her husband, Allan Ohman; her parents; her three brothers, Eugene, Kenneth, and Roger Miller; and her beloved pets Charlie and Toby. A graveside memorial for family and friends will be held Saturday, April 30th at 11:00 at Oak Grove Memorial Gardens in Irving, Texas under the direction of Lucas Funeral Home in Hurst. Donations in Betty’s memory may be made to the Alzheimer’s Association.

Betty Lou Miller Ohman went to be with her Heavenly Father on April 6, 2022 at Universal Hospice in Fort Worth, Texas surrounded by her family. She was two weeks shy of celebrating her 88th birthday. Betty was born April 17, 1934 in Bellefonte,... View Obituary & Service Information

The family of Betty Lou Ohman created this Life Tributes page to make it easy to share your memories.

Betty Lou Miller Ohman went to be with her Heavenly Father on...

Send flowers to the Ohman family.