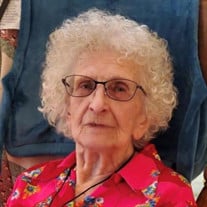 Betty Gay Shuford was born on March 26, 1931, in Childress Texas, to Ernest P. Shuford and Valerie M. (McDaniel) Shuford. She went to Heaven to be with God and the rest of her family and friends at 8:00am on the morning of April 6, 2022, at the age of 91 years old. She was preceded in death by her parents Ernest and Valerie Shuford, two husbands, Kenneth Harris and Hubert Kaylor, two children, Gerald Kaylor and Cheryl Krejci, one very special Son-in-Law Kevin Dockter; two Grandchildren, Kerry Harris and Sally Douglas, her two brothers, Ray Shuford and David Shuford, a very special sister-in-law, Doris Hurd and husband Gordon, and very special Nieces, Charlotte Franke and husband Ernest Franke, and Diane Shaffer. She is survived by her children, Steve Barrett Sr. and Pam Barrett, Brad Harris and wife Natalie, Sherrie Marie and husband Joe, Camille Dockter; Paul Harris and wife Debbie, Laquita Price, Wade Kaylor and wife Connie, Dorcas Latham and husband Terry, Patricia Douglas, Nina Howell and husband Larry, Phyllis Mays and husband Terry. She is also survived by 34 Grandchildren; 72 Great Grandchildren, 9 Great-Great Grandchildren, and special Great Nieces and Nephews, Jack Franke, Dan Franke, Evelyn Franke and Kimberly Franke and their families, as well as her Nephew, Scott Shuford and his wife Kyle, and Nieces, Michelle McFarland and husband Daren, Madalyn McDaniel and husband Jerry, and Kathleen Buckner and husband Steve. She is also symbolically survived by literally hundreds of the parents and children that travelled the paths of Windward Way, Ridgecrest and Shepard Drives in Euless, TX. mainly in the 1960s – 2000s, and beyond. She healed our wounds, both physical and emotional, sometimes with soft love, sometimes with tough love, but always with love. She never met a stranger, and she showed love and care for many of these parents and children when they needed it the most. Most of Betty’s working life was spent as either a preschool teacher or a bookkeeper. She spent several years as a kindergarten teacher at the First United Methodist Church in Euless where she touched the lives of many students, and she spent many years as a bookkeeper for the Credit Union at Ryerson Steel in Dallas, where she touched the lives of many of the people that worked there as well. Later in life, Betty joined the Senior Center in Euless where she spent many hours enjoying the company of the city’s other senior citizens, taking various craft classes and listening to the bands that were brought in as entertainment for the Seniors.

Betty Gay Shuford was born on March 26, 1931, in Childress Texas, to Ernest P. Shuford and Valerie M. (McDaniel) Shuford. She went to Heaven to be with God and the rest of her family and friends at 8:00am on the morning of April 6, 2022, at... View Obituary & Service Information

The family of Betty Gay Kaylor created this Life Tributes page to make it easy to share your memories.

Send flowers to the Kaylor family.