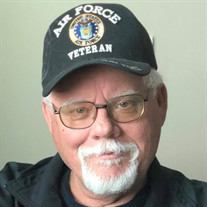 Bearl Gene Dixon age 70, of Hurst, Texas passed away Tuesday evening, July 27, 2021, surrounded by family in Hurst, Texas, due to health complications He was born September 11, 1950 in Columbus, Georgia to Millie C. Dixon and Bearl S. Dixon. Bearl graduated from Lawton High in Lawton, Oklahoma in 1968 then attended Cameron University for 2 years before joining the USAF in 1970. He was married to Delores Dixon on June 4, 1971 in Lawton, Oklahoma. Being born into the military family and traveling around for a bit played a role into him joining the military himself in which he and his family were stationed in many locations including Washington D.C., Ramstein Germany, Minot North Dakota, Muskogee, Oklahoma (where he was a recruiter), Witchita Falls, Texas, Geilenkirchen Germany NATO AFB, and ending his career at Whiteman AFB near Warrensburg, Missouri. where he resided for 30 years. His career with the Air Force spanned 22 years to retirement in 1992. While in the Air Force he fulfilled many roles and ended his career as Master Sergeant. During his military career he obtained his associates and bachelor's degree from Park University. After retirement Bearl began his career at the United States Postal Service, where he worked for 18 years before retiring again. Some of his passion and enjoyment came from playing golf, attending and watching NASCAR, cheering the OU Sooners and Dallas Cowboys, spending time with friends and loved ones. He was a devout Christian. He attended New Life Church in Oak Grove, Missouri for 20+ years. His humor, generosity and love for others was infectious. Everyone loved his personality and he was always the life of the party, if you don't believe me you could have asked him. He’s the one over in the corner singing “you ain't nothin but a hound dog, cryin' all the!” For the 3 years he has resided with his sweetheart, Barbara Kappus, who was also by his side at his home going! Survived by Shanna (Matt) Summitt of Warrensburg, MO, Shawn Dixon of Higginsville, MO, Shane (Karrisa) Dixon of Warrensburg, MO, Seth (Ruth) Dixon of Warrensburg, MO; his beloved grandchildren, Noah, Hannah, and Maci Summitt, Alexis and Hayley Dixon, Malachi and Kinslee Dixon, Ezra and Liviana Dixon. Survived by his brother Jerry (Gail) Dixon of Cache, OK. Predeceased in death by wife Delores Dixon, brother Harold Dixon, parents Bearl and Millie Dixon. Donations may be made to Swinney Phillips & Holdren (617 N. Maguire St. Warrensburg, MO. 64093).

The family of Bearl Gene Dixon created this Life Tributes page to make it easy to share your memories.

Send flowers to the Dixon family.