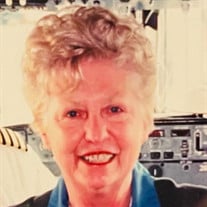 Barbara “Barb” Ewing Anderson 84, formerly of Punxsutawney, Pennsylvania and died in Fort Worth, Texas on Wednesday, March 8, 2022. Barbara was born on January 21, 1938, in Punxsutawney, Pennsylvania. She was preceded in death by her parents Dorothy McMillian Anderson and Francis LeRoy “Dutch” Anderson. She was a member of the 1st English Lutheran Church of Punxsutawney and a graduate of 1955 graduate of Punxsutawney High School. Upon graduating high school, she became a Dental Assistant. She began her career as a Stewardess with Northeast Airlines on May 4, 1961. She was based in New York City. On August 1, 1972 Delta Airlines merged with Northeast Airlines. At this time, she transferred to Delta’s Flight Attendant Base in Dallas, Texas. Thus, making The Colony, Texas her home for 50 years. Barbara’s flying career continued on with Delta for a total of 43 years. She retired as a Delta Airlines Flight Attendant in 2005. She enjoyed her flying career immensely! She forged many wonderful friendships with her fellow Flight Attendants throughout her career with Northeast and Delta Airlines. She traveled near and far; enjoying a wonderful blessed life. She enjoyed fishing, golfing, and skiing. She was a member of The Delta Airlines Women’s Golfing Team, bringing home many trophies. She is survived by her cousin Timothy S. Meenan, and wife, Sandi, of Punxsutawney, along with a host of cousins. She leaves behind her loving fur baby devoted companion of 15 years, Miss Daisy Mae. Also, her dear friends and caregivers, Marilyn and Norm Kemp. She will be greatly missed. Funeral service will be at 11:00 A.M., on Friday, March 18, 2022, at Deeley Funeral Home with interment at Lakelawn Memorial Park.

The family of Barbara Ewing Anderson created this Life Tributes page to make it easy to share your memories.

Send flowers to the Anderson family.