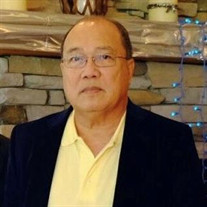 Armando Nelson Saril, an outdoorsman who loved to sing, passed away at 73 on May 21 in North Richland Hills, Texas. The second son of Cezar Saril Sr. and Loreto Van Saril, “Nene” was born in Bacolod, Philippines, on March 8, 1949. Camping and fishing, his pastimes as a kid, carried into adulthood. Nelson’s love for singing also began at a young age; in high school he was part of a band. He enjoyed serenading everyone at parties with songs by Elvis, Matt Monro, and Frank Sinatra. Nelson had a prankster side, loving to play jokes on his siblings and tell big, exciting stories. However, family and community were the center of his world and he was also an incredibly protective brother and father. Upon moving to California in 1984, Nelson became heavily involved in the Filipino Catholics group in Orange County, eventually leading it as president. Nelson married Lorelei Gonzaga in 1981 and they had two children, Nyree Garcia and JJ Saril. Years after Lorelai’s passing, he married Amelia Fernandez, a loving stepmother to his children. Nelson suffered another loss with Amelia’s passing from cancer in 1994. He later married Antonnieta “Baby” Casten, who sadly passed away from stroke complications. Nelson met his fourth wife, Lea Beliran Saril, in 1998 and they married in 2007. Together they had son Shanerick Armand Saril in the Philippines and raised him in Colorado and Texas. Two days after the funeral, Shanerick is set to graduate from Richland High School with honors and attend the University of Texas at Arlington. Nelson is survived by his wife Lea and children Nyree, JJ, and Shanerick, and stepdaughter Dominique and Kristine; son-in-law Jorge Garcia and grandchildren Jake, Juan, and Michael; and siblings Alex Saril, Rosanna Saril Lacher, Loce Saril Ordonez, and Elmer Saril.

Armando Nelson Saril, an outdoorsman who loved to sing, passed away at 73 on May 21 in North Richland Hills, Texas. The second son of Cezar Saril Sr. and Loreto Van Saril, &#8220;Nene&#8221; was born in Bacolod, Philippines, on March 8, 1949.... View Obituary & Service Information

The family of Armando Nelson Saril created this Life Tributes page to make it easy to share your memories.

Armando Nelson Saril, an outdoorsman who loved to sing, passed...

Send flowers to the Saril family.