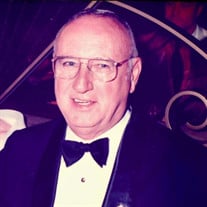 Anthony Joseph Wisper Casper, 88, went home to be with the Lord Jesus Christ on Sunday, March 13, 2022. We will miss his warm welcomes, his contagious sense of humor, and his steadfast devotion to family and faith. He was born Anthony Joseph Wisper on December 12, 1933 in Albany, New York, to Rita Marie Firlik Wisper and Anthony Joseph Wisper. After the senior Anthony passed away, Rita remarried, and Anthony was adopted by his stepfather Stephen J. Casper; both Rita and Anthony took Stephen’s last name. Upon completing high school, Anthony enlisted in the U.S. Army at 17 years old and served 2 years in active duty, attaining the rank of Corporal. He continued in the U.S. Army Reserve for another 6 years, where he received the rank of Sergeant during the Korean War. Anthony then met Mary Ann Hertzel and they married on June 16, 1956 in Albany, New York. Together they had five boys: Tony, Michael, Stephen, Mark, and Matthew. After marriage, Anthony began a long-lasting career with American Airlines, which took the family to San Antonio, Texas in 1969. They then moved to Lufkin, Texas in 1980, where Anthony started his own business, Aamco Transmissions, before returning to American Airlines and finally settling in the Dallas/Fort Worth area in 1987. Mary Ann passed away in 2016, after 60 years of devoted marriage. Throughout his whole life, Anthony was a passionate Catholic, with a strong devotion to the Blessed Virgin Mary and to St. Anthony of Padua, among other saints. He was a familiar sight to everyone in his parish community at St. Elizabeth Ann Seton in Keller, Texas, where he regularly attended both weekend and daily Masses and led the Rosary and Divine Mercy Chaplet on a weekly basis. He was also a dedicated member of the Knights of Columbus, which he joined as a first-degree Knight on April 1, 1974; throughout his 47 years of continued service in the organization, he rose to the rank of fourth-degree Knight and held several Officer positions, including Grand Knight and District Deputy in the third degree and Faithful Navigator, Faithful Admiral, and Faithful Trustee in the fourth degree. His faith was the most important thing in his life, and he instilled his family and friends with ardent love for the Lord. Anthony is preceded in death by his loving wife Mary Ann Hertzel Casper, his mother Rita Marie Firlik Wisper Casper, his father Anthony Joseph Wisper, and his stepfather Stephen J. Casper. He is survived by his sons and their wives: Anthony and Mindy Casper, Michael and Vicki Casper, Stephen and Deidre Casper, Mark and Melanie Casper, and Matthew Casper. He is also survived by his grandchildren and their spouses and children: David and Mallory Casper; Laura, Michael, and Reagan Norman; Daniel Casper, Ryan, Jesica, and Juliet Casper; Rachel and James Jordan; Caralina and Brendan Cutrer; Stephanie, Joshua, Luke, and Lillian Adams; Christopher Casper; Emily Casper; Monica and Emilia Schleis; Michele, Andy, and Charlotte Markow; and Samantha Casper. He is also survived by his brother-in-law Thomas and sister-in-law Barbara Partenope, and nephews Tom and Stephen Partenope and their families, as well as his cousins and special friends. Memorial donations may be made to St. Vincent de Paul or Catholic Charities

Anthony Joseph Wisper Casper, 88, went home to be with the Lord Jesus Christ on Sunday, March 13, 2022. We will miss his warm welcomes, his contagious sense of humor, and his steadfast devotion to family and faith. He was born Anthony Joseph... View Obituary & Service Information

The family of Anthony Joseph Casper created this Life Tributes page to make it easy to share your memories.

Anthony Joseph Wisper Casper, 88, went home to be with the Lord...

Send flowers to the Casper family.