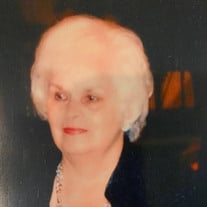 “Her children rise up and bless her, her husband, also, and he praises her.” Proverbs 31:28 On February 2, 2021, at 8:01 PM, with open arms, her Lord & Savior welcomed Anne into His Heavenly Kingdom to live with Him forever and ever. Anne was born on March 24, 1934, in Brooklyn, NY, to Rev. Kenneth Whitcomb Dietze & Paula Alma Grube Dietze. The oldest of five children, Anne grew up in Western NY & PA. An honor student, who excelled in her English classes, she enjoyed playing the cello in the high school orchestra. She would often accompany the worship services, by playing the piano & organ. Anne was successful in playing most every instrument that she ever picked up. Her love & appreciation of music could be attributed to her father & his parents, who were professional musicians in the New England area, and her great-grandfather, who was the co-founder & first director of the Riverside, CA, Symphony Orchestra. While in high school, Anne met her soul mate, Donald A. Quick. They were married in Shinglehouse, PA, on February 21, 1953. Anne & Don became the parents of five children, Dianne (Mark Wallace), Donald (Mary Lou VanderVeldt), David, Deborah (David Newton), and Daniel (Carey Gauer). Anne’s life was full of love for her 13 grandchildren and 19 great grandchildren, with a new blessing due this coming Spring. In addition to her husband, children, grand & great grandchildren, Anne leaves behind her sister, Marilyn, brother, Paul, their spouses, many nieces & nephews & great nieces & nephews, and lifelong friends & prayer partners that the family met, while living in NY, PA, El Segundo & Corona, CA, Zanesville, OH, and Keller, Texas. After kneeling before Jesus, Anne will, no doubt, give loving hugs to her son, David, who died of cancer on his 16th birthday, her great grandson, Noah, her parents, sister (Elizabeth), brother (Kenneth), several nephews, and other loved ones & dear friends. A prayer warrior, even in her final days, Anne continually prayed for her family, friends, our Nation, and this World! It has been said that Anne never met a stranger. AND there is no doubt that before one parted ways, Anne would have shared about God’s love and His salvation of everlasting life, through God’s Son, Jesus, our Lord! “Though our family grieves our loss, we rejoice in knowing that one day, we will see Mom again, and we, too, will bow down before Jesus & thank Him for giving His life for us, at Calvary…then we will turn around, and run to Mom and give her a loving hug! But, be assured…”That Until Then, Our Hearts Will Go On Singing…” As her great grandson, Barron, said recently, “I want to see Grandma, before she goes POOF, and goes to live with Jesus!” The family will celebrate the life of Anne, during a private burial ceremony, per her wish. On behalf of Anne, the family kindly requests that you do not send flowers, but donate to your favorite charity. The Quick family would like to thank Lucas Funeral Home, in Keller, Texas, for providing us with your thoughtful & professional services.

The family of Anna Ruth Dietze Quick (Anne) created this Life Tributes page to make it easy to share your memories.

“Her children rise up and bless her, her husband, also, and he...