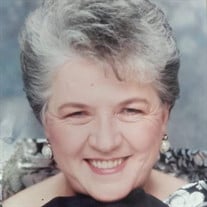 Fort Worth, Texas – Alma Jean gained her wings on Friday morning, September 3rd at the age of 91. She was a loving mother, grandmother, great grandmother and aunt. Alma Jean was affectionately known by many names Mom, Nannie, Aunt Tabby, Jean and Jeanie. Born on January 20, 1930 in Decatur, Alma was the youngest daughter of William and Annie Rasbury. Alma Jean graduated from Decatur High School where she was Co-Captain of her basketball team and a member of the volleyball team. She was also part of the pep squad and Choral Club. In 1947, Alma graduated high school and married her high school sweetheart, John Perry Carson before he went off to war. They raised one son John R. Carson. The three of them lived in Decatur until work brought them to Venezuela. They lived in Venezuela for 5 years where her son attended elementary school. When they came back to the states they settled in Houston. There she worked as an office manager for Gene Bean Insurance at Frank Gillman Pontiac. Several years after her husband passed away from cancer, she married her longtime friend Eugene Bean in 1982. They enjoyed traveling and lived in Houston for many years before deciding to move to North Richland Hills. Several years after Eugene passed away from cancer, she renewed her friendship with Hestel Walker and in 1988 they married and enjoyed their life together for 27 years until his passing. Alma Jean devoted her life to her family, friends, church and community. She walked in faith and loved the Lord. Her charm, elegance, grace and style made her a beloved friend and companion to many. Traveling and entertaining were important parts of Alma Jean’s life. Her door was always open, she was always willing to lend a hand and never met a stranger. She loved to laugh, joke, have fun and was always the life of the party. More than anything she loved her family and children. If there was a baby around you knew it would be in her arms. Throughout the years, she helped raise many children and was a caretaker for several loved ones. Alma was devoted to her family and friends, traveling far and wide to be with them. She never missed a performance, game or event that involved her family. Alma Jean was a very strong, independent woman and a fighter that beat breast cancer twice. She was a member of Eastern Star in Haltom City. Alma Jean loved square dancing with her husband and had a passion for traveling, dollmaking, sewing, dancing, singing, piano, sports and crafting. She received many awards in go cart racing, golf, and bowling. Her devotion to her faith is her greatest legacy and her family was her greatest joy. She was deeply loved and will be greatly missed. She was preceded in death by her father and mother, William and Annie Rasbury. Her loving first husband John Perry Carson, second husband Eugene Bean and third husband Hestel Walker. Her beloved brothers and sisters, Louella Rasbury, Bernice Rasbury, Lester Rasbury, Avery Guinn Rasbury, Ruth Schmidt, and Minnie Morris. As well as many cousins, nieces and nephews. She is survived by her son and daughter in law, John and Jan Carson. Her grandchildren, John P. and Amanda Carson, Michael D. Carson, Sherri Wilson and her husband Russell E. Wilson. Her great grandchildren Krista Carson, Marissa Carson, Mackenzie Longino, Ethan Carson and Connor Wilson. Along with many nieces, nephews A celebration of her life will be held on September 8, 2021 from 6-8pm at Lucas Funeral home located at 1321 Precinct Line Road, Hurst TX 76053. Graveside services will be held at 1101 Antoine Drive, Houston TX 77055 on September 9, 2021 at 1pm. Flowers may be sent to Lucas Funeral home at 1321 Precinct Line Road, Hurst TX 76053.

Fort Worth, Texas &#8211; Alma Jean gained her wings on Friday morning, September 3rd at the age of 91. She was a loving mother, grandmother, great grandmother and aunt. Alma Jean was affectionately known by many names Mom, Nannie, Aunt Tabby,... View Obituary & Service Information

The family of Mrs. Alma Jean Walker created this Life Tributes page to make it easy to share your memories.

Send flowers to the Walker family.