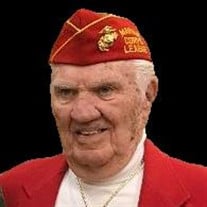 Alfred Lester McCluney, Jr. (A.L.), 90, passed away January 3, 2021 at home in Hurst, Texas. He was born in Fort Worth on September 13, 1930 Alfred L McCluney, Sr. and Susie Pearl Roberts McCluney, and spent his early years at 1448 Elmwood Avenue in Fort Worth. A.L. graduated from Paschal High School, Class of 1948, and from TCU in 1964, with a Bachelor of Business Administration degree. He worked in the banking industry for several years, then went on to work for and later retired from the U.S. Housing and Urban Development. His territory including much of Texas and New Mexico. A.L. was a true and proud Texan and who joined the United States Marine Corps Reserves in May 1950, during the Korean War era. He served in VMF112, Dallas, Texas, and other areas within the Wing, leaving the USMC in March 1957, at the rank of sergeant. He retained his love for the Corps throughout his lifetime and was a member of the Tarrant County Marine Corps League #4741 for 38 years. He also was a consistent supporter of the DFW Toys for Tots program. A. L. Was also a member of the American Legion Post 516 for 23 years. A. L. belonged to several other organizations. In his early years, he boxed with the Texas Golden Gloves in Fort Worth and fought legendary boxer Sweetwater Sweet. He was a member of the Fort Worth Masonic Lodge #1183 for over 50 years. Roll Call is a meeting of veterans that A.L. looked forward to attending each month. and he was honored to lead the Pledge of Allegiance at the last meeting he attended in December 2020. Also A.L. Attended monthly meetings at the Colonial Friends for over 25 years. He was an avid TCU football and basketball fan. A. L. loved Big Band music and ballroom dancing. He enjoyed attending the Children’s Charities of Fort Worth Margarita Ball for many years. He dearly loved the Heart Over Heels Trio (Pam, Naomi, and Marilyn) and the show they would put on at his and Dan Varnedore’s birthday party each September. A. L. Is survived by his significant other, Betty bass, and by Dan and Diana Varnedore, who affectionately referred to A.L. as Pappy. Dan and A.L. had a special “father-son” relationship for many years, and they took many memorable road trips together. He has also survived by daughter, Kathy Wafford and husband Gene. He also loved his Bichons, the late Tiffany (mascot of the Marine Corps League) and Muffin, who survives him. Semper Fi, Marine for life well lived. You will be missed! In lieu of flowers, remembrances in A.L.’s honor may be made to DFW Toys for Tots, 704 Raven Dr., Saginaw, TX 76131, or the Humane Society of North Texas, 1840 E. Lancaster Ave., Fort Worth, TX 76103. A visitation will be held from 6:00 to 8:00 P.M., on Wednesday, January 13, 2021 at Lucas Funeral Home in Hurst. A.L. will be laid to rest at 11:00 A.M., on Tuesday, January 19, 2021 at Dallas Fort Worth National Cemetery.

The family of Alfred "A.L." Lester McCluney created this Life Tributes page to make it easy to share your memories.

Send flowers to the McCluney family.