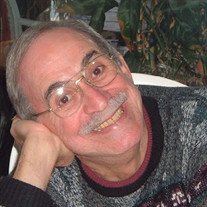 Alfonso Adrian Cardenas was born in Havana, Cuba, on February 23, 1944, and was rejoined with his heavenly family on April 17, 2021. He is survived by his loving wife of 46 years, Liliana, their four children: Liliana Cardenas, married to Jason Risley; Adrian Cardenas, married to Jennifer Mayo; Yvonne Cardenas, engaged to Chris Larzalere; and Hector Cardenas, married to Christine Satter; his sister Teresa Edenia Andriella married to James P. Andriella, Jr.; his 10 grandchildren: Maria and Emma Risley; Matthew and Anne Cardenas; Jackson Brown and Juliana Larzalere; and Alora, Aria, Arabella, and John-Dominic Cardenas. Alfonso had a happy childhood in Cuba. He went to a Catholic School - Los Hermanos Maristas. He loved playing baseball; he was a pitcher and once pitched two full games of a double-header and 1 no hitter. At the age of 16, his father sent him to live in Florida. He was the first of his family to immigrate from Cuba to the United States. The rest of his family joined him in early 1961. He worked hard to build a life. His first job was working at a grocery store bagging groceries. He also worked as a shoe salesman and waiter during his school breaks. He dreamed of becoming a medical doctor. He decided to study in Costa Rica. He would study there, and then on school breaks go back to Florida to work and earn money for school. During one semester, he was having difficulty (i.e. failing) chemistry and found a tutor named Eduardo Canessa (his future brother-in-law). During this first session at Eduardo’s house, while sitting in the dining room, he saw Liliana Canessa walk by and was lovestruck - he thought to himself - “that is my wife”. He asked her if he could “see” her as a boyfriend, to which she agreed. They dated 6 years and 15 days before marrying on January 11, 1974. He became a U.S. citizen in 1983 with Liliana (wife) and Liliana (daughter) and was very proud to be an American. He was ordained as a Deacon of the Catholic church on April 30, 1993 after which he served at Sts. Peter and Paul Catholic Church in Cushing, OK, where the family lived for 33 years. He practiced as an OB-GYN for years, during which time he delivered over 6,000 babies. He even delivered his first two grandchildren. Alfonso was a devoted husband, father, doctor and deacon - and a huge Yankees fan. He touched many lives. He will be missed greatly by his family and friends. We love you, and we will see you again someday. With Unending Love and Admiration, The Cardenas Family If you would like to make a donation in his name here are three charities Donations to: St. John the Apostle Catholic Church https://www.sjtanrh.com/ St. Jude Children’s Research Hospital https://www.stjude.org/give/memorials-and-dedications.html?sc_icid=wtg-lz-memorials The North Richland Hills Animal Adoption & Rescue Center https://www.nrhtx.com/89/Animal-Services

Alfonso Adrian Cardenas was born in Havana, Cuba, on February 23, 1944, and was rejoined with his heavenly family on April 17, 2021. He is survived by his loving wife of 46 years, Liliana, their four children: Liliana Cardenas, married to Jason... View Obituary & Service Information

The family of Alfonso Adrian Cardenas created this Life Tributes page to make it easy to share your memories.

Alfonso Adrian Cardenas was born in Havana, Cuba, on February...