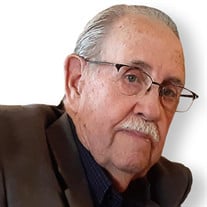 At 2:10 in the afternoon on December 16, Alvin Doggett was carried by the angels to heaven as 21 members of his family surrounded him and sang How Beautiful Heaven Must Be and I Can See the Lights of Glory which was written by Alvin. He left us at the age of 89 years 99 days. On September 8, 1932 Jeff and Allie Taylor of Hylton, Texas welcomed their eighth child and seventh son, Alfa Alvin Doggett. Alvin’s family later moved to Lampasas, Texas where he graduated from high school in 1950. He was soon drafted into the army and stationed at Fort Hood, Texas and Camp Gordon in Augusta, Georgia. He married the love of his life, Gertrude Sumerford, on May 30, 1953, in Hamilton, Texas. Alvin and Gertrude added three daughters to their family, Beverly Ann, Debora Jean, and Kyra Juanece. Baptized in Lampasas, Texas around the age of 15 years, Alvin was faithful to his Lord throughout his life. He worshiped with the Baker Boulevard Church of Christ for the past 57 years, serving as a deacon and then as an elder for a total of 30 years. Alvin worked for the E.B. Mott company for 46 years. He started his career as a stock boy sweeping floors and retired from the company in 1994 as a Merchandise Buyer and a member of the Board of Directors. Alvin was devoted to his family and was always reminding them of how proud he was of each and every one. He loved the Lord’s church and his church family. He would tackle any repair job, and he always had plans for his next project. Alvin’s backyard is a show-place of flowers, greenery, walkways, and antiques. He loved being outside. Alvin is survived by his wife of 68 years and 199 days, Gertrude; children, Randy and Beverly Watkins, Deral and Debbie McWhorter and Kyra Cruse; his grandchildren, Joshua and Tamin Watkins, Devon and Erica Watkins, James and Kendra McWhorter Hammack, Drew and Kayla McWhorter Hyde, Briana Cruse, Cole and Mallory Watkins, Nick and Brook Cruse Hoover, Brittany Cruse and fiance Dustin Kmetz, and Bratina Cruse; great-grandchildren Meagan, Sarah, Faith, and Charlie Watkins; Cason and Carter Hammack, Emelia, Preston, Annabelle, Anderson, Madeline, and Marshall Hyde; and Lucas Hoover. Alvin is also survived by one sister, Golda Burns, and one sister-in-law, Gypsy Doggett, along with a host of nephews and nieces.

At 2:10 in the afternoon on December 16, Alvin Doggett was carried by the angels to heaven as 21 members of his family surrounded him and sang How Beautiful Heaven Must Be and I Can See the Lights of Glory which was written by Alvin. He left... View Obituary & Service Information

The family of Alfa Alvin Doggett created this Life Tributes page to make it easy to share your memories.

Send flowers to the Doggett family.