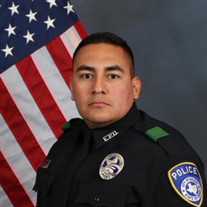 Alejandro “Alex” Cervantes, Jr. was born on November 30, 1984 in El Paso, Texas and passed away on November 27, 2021 at the age of 36 years old. He graduated from Gadsden Highschool in Anthony, New Mexico. He was a graduate of University of Phoenix with a Master’s Degree in Business Administration. Alex was a committed and loyal police officer. He began his career in law enforcement with the El Paso Police Department where he worked as part of the SWAT Team, Bomb squad, motorcycle unit, and eventually as a detective. In 2015 he became part of the Euless Police Department family where was also a detective and part of the Euless Police Department Honor Guard. He received numerous commendation letters and in 2018, he was awarded the Distinguished Service Award. Alex was a volunteer for The Young Marines, a national non-profit youth education and service program for boys and girls, where he was a diligent leader and educator with their Color Guard. Alex was also a devoted family man and adored his family. He was a fun loving and generous man who loved to laugh. Alex is survived by his wife, Priscilla Cervantes of Fort Worth; children, Jake Cervantes and Josh Cervantes of Fort Worth; parents, Alejandro Cervantes, Sr. and Lourdes (Mireles) Cervantes; brother, Cesar Cervantes; sister, Karen Cervantes all of Anthony, New Mexico; father and mother-in-law, Daniel Medina, Jr. and Sandra Medina of El Paso, Texas; brother-in-law, Daniel Medina, III and wife, Susanna and their daughters, Victoria and Danielle also of El Paso, Texas; extended family members, loving friends, and beloved brothers and sisters of law enforcement. Visitation will be held from 6:00 to 8:00 P.M., Friday, January 7, 2022 at Lucas Funeral Home in Hurst, with Rosary service at 6:30 P.M. Funeral Mass will be celebrated at 12:30 P.M., Saturday, January 8, 2022 following public visitation at 11:30 A.M. at St. Elizabeth Ann Seton Catholic Church located at 2016 Willis Lane, Keller, Texas 76248. Interment will be held at 11:30 A.M. on Monday, January 10, 2022 at Memory Gardens of the Valley located at 4900 McNutt Road, Santa Teresa, New Mexico 88008. In lieu of flowers please consider donations to Euless Police Benevolent Organization - Alex Cervantes Family The Funeral Mass for Alex Cervantes can be joined via livestream by following the link below: https://vimeo.com/event/1504906

Send flowers to the Cervantes family.