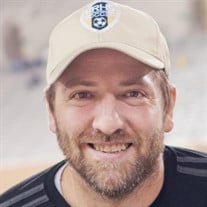 In lieu of flowers, please send contributions to the education fund Venmo: @Webb-Family Fort Worth, TX – Viewing for Mr. Adam James Webb, 47 who entered into rest April 26, 2021, will be held Saturday morning from 9 o’clock until 11:30 at The Church of Jesus Christ of Latter Saints, 7600 N. Beach Street, Fort Worth, TX. He was born in Laconia, New Hampshire then moved to Colorado, Utah, and finally, the place he called home, Texas. In his early life, Adam was strong and always happy. His older brothers adored him. Soon he was the middle child of six. Later, he and his wife would say they were two middles getting together. He was a lively sports enthusiast and lover of music. Adam enjoyed the activities of The Boy Scouts of America, particularly repelling, and he earned the rank of Eagle. He was an excellent student in school. He held the record for the most books read. His chemistry teacher was amazed at his ability to retain information. His Dad knew soccer and he and all his siblings began playing when they were little. Although, he was only 5’10”, he earned a spot on the Varsity High School Basketball team with his ability to defend, shoot 3 pointers, and dunk! As a Varsity player, he was to coach a team in the High School Sports Clinic. He really valued each team member and helped them improve their game. He graduated from McCullough High School, in The Woodlands Texas. He has been a longtime member of the Church of Jesus Christ of Latter-Day Saints where he served a full-time Portuguese speaking mission in the Brazil Manaus Mission for 2 yrs from 1993-1995. This began the journey of his love of all languages and cultures. In September of 1995, after Adam’s mission, Adam met Casaundra at an Institute activity playing basketball, in Adam’s words “when I saw Casaundra playing basketball I wanted to meet her”. After a short courting and engagement, they were married in Dallas Temple on December 29, 1995. They began the journey of his undergraduate at Brigham Young University and obtained a degree in Psychology while having three (Chasia, Samantha, and Mercedes) of the five children. He began his teaching career in 2004 at Mount Pleasant, Texas as Spanish Teacher and Assistant Soccer coach. Adam enjoyed his first 3 years of teaching. while living in Mount Pleasant they had an addition to their family (Rockwell). Summer of 2006, He continued his career as a head soccer coach, assistant football coach, and Spanish teacher in Livingston Texas where their last child (Allyson) was born. Adam loved to share his passion for soccer, he helped build the Soccer Association in Livingston TX. By the time he and his family moved on to their next adventure. Livingston grew from under ten teams to over thirty teams and three competitive traveling teams. In 2012, he and his family moved to Fossil Ridge High school as A Head soccer, JV volleyball coach (for a time), and Spanish teacher. He and his family found a place they called home. He has loved working at Fossil Ridge High School, he has said many times, The “Ridge” is my family. They have done anything and everything for us over the past nine years and especially over the last three and a half, without ever being asked. He could have gone anywhere, chosen any profession, but he wanted to work with young people and help them see their best selves. Coach Webb was a dedicated husband, father and loved his family with all of his heart. Survivors include his wife, Casaundra Krestina Webb; children, Chasia Krestina, Samantha Lucile, Mercedes Eve, Rockwell B, and Allyson RayeAnne. Parents, Ray B and Catherine Gunn Webb, Siblings: Rex Bretton (Keri) Webb, Harold Tristan Webb, Amanda Margaret (Peter) Nettesheim, TeriAnne (Daniel) Harman, Joseph Ray (Steffany) Webb. Parents in law, Alice and Jerry Leisure, Siblings in law: Shana (Curt) Meredith, Jennifer (Paul) South, Dianna (Daren) Heiner, Jerry (Kristen) Leisure, Shantelle (Joseph) Martin, Nathaniel (Svetlana Carino) Leisure, Enoch Leisure, Michaella (Bridger Doty) Leisure. 47 nieces, nephews, and 57 cousins. Preceded in death by his Grandparents, Rex B and Lucile Jensen Webb and Harold Woodrow and Geraldine Margaret Kluge Gunn.

In lieu of flowers, please send contributions to the education fund Venmo: @Webb-Family Fort Worth, TX &#8211; Viewing for Mr. Adam James Webb, 47 who entered into rest April 26, 2021, will be held Saturday morning from 9 o&#8217;clock until... View Obituary & Service Information

The family of Adam James Webb created this Life Tributes page to make it easy to share your memories.

In lieu of flowers, please send contributions to the education...